Main Street Welcome Medley
Our day at the Magic Kingdom started BRIGHT and EARLY.  The park was set to open at 9am and we had 8am reservations at Cinderella's Royal Table INSIDE the Cinderella castle- partly so we could eat in the castle and partly so we could get unobstructed views of Main Street and the castle.  However, the week before our trip Disney switched the park opening to 8am in anticipation of big crowds.  We grew concerned not only about the crowd level but about getting our unobstructed views!!
We were all up by 6am and quickly left for our drive to the park.  We pulled up to the parking attendant and he happily welcomed us to the Magic Kingdom and let us know that we were the first car through his lane!!  The FIRST car!!!  We were excited!  We pulled into the parking lot and as it turns out, we were car number 3 and 4 in the whole park!!
We loaded up the stroller and made our way to the entrance.  They had one section of turnstiles set up for those going to breakfast in the park and the rest were just for general entrance.  Since we were nice and early we were first in line at the turnstiles. 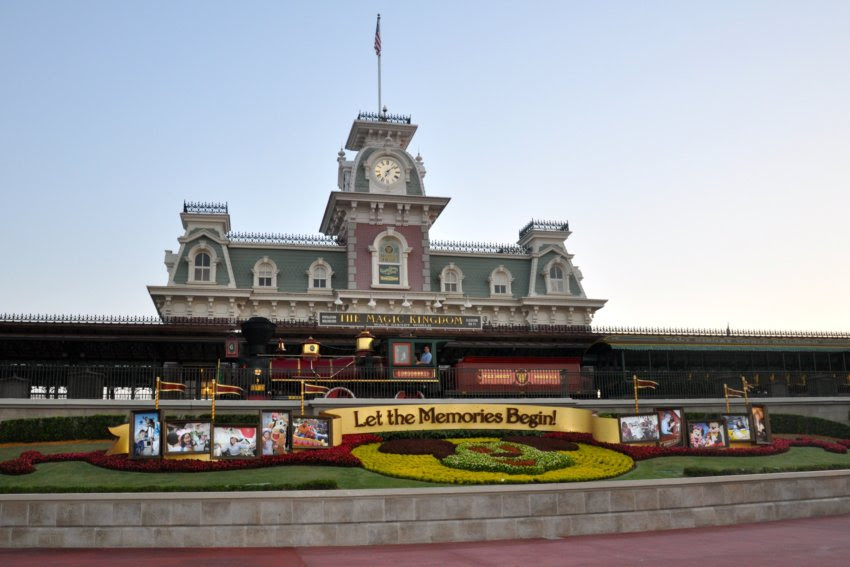 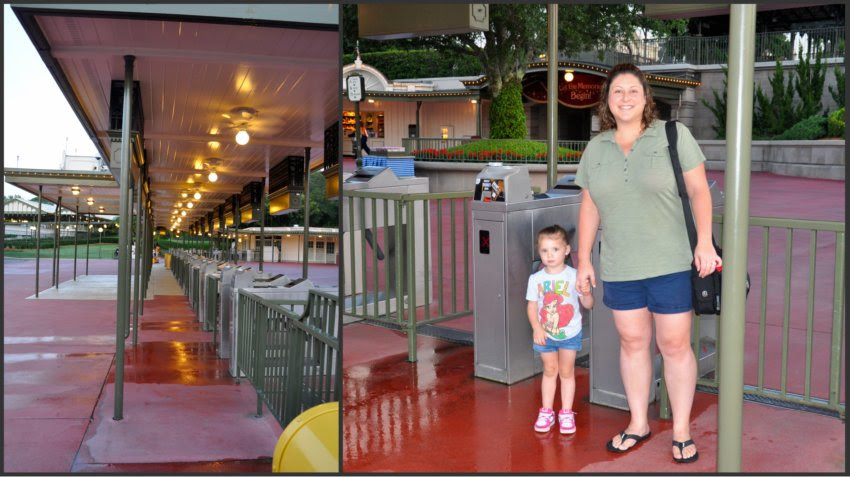 Empty turnstiles.
We made our way through the turnstiles and then lined up under the archways that let you enter the park.    The kids were given pixie dust (Mickey confetti) so that they could make a wish while we waited to officially go in.

Excited to be first!!
Finally it was time to go in and we were the FIRST ones in the Magic Kingdom!!  It was surreal to see everything without the typical crowds.

Park views.
We took our time getting to the castle so that we could stop for pictures and enjoy the views. 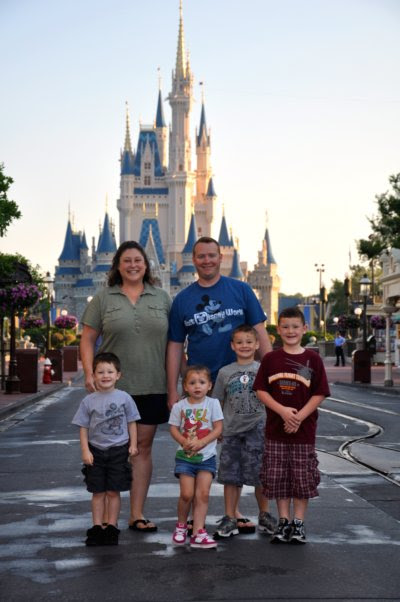 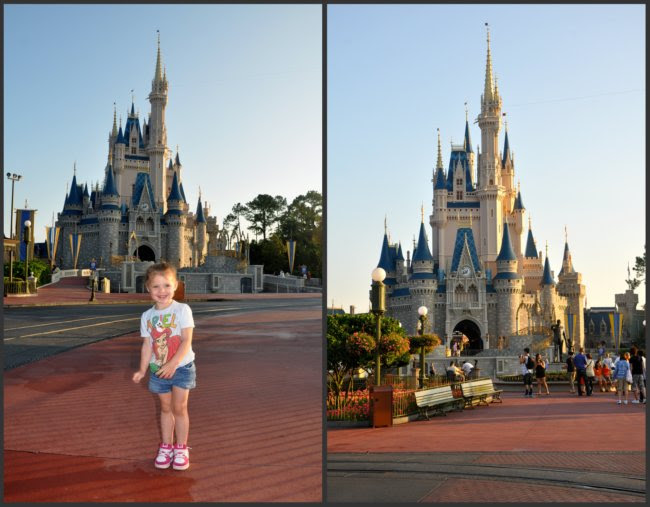 Our princess and "her" castle

We checked in at Cinderella's Royal Table for breakfast and as the park officially opened at 8am, Grandpa (in the red) ran to Peter Pan's Flight for our first fast passes of the day!
We met Cinderella when we arrived in the castle and then we were taken to our seats.  We had an amazing breakfast of stuffed french toast, scrambled eggs, bacon, sausage, and fruit while meeting all of the Disney princesses. 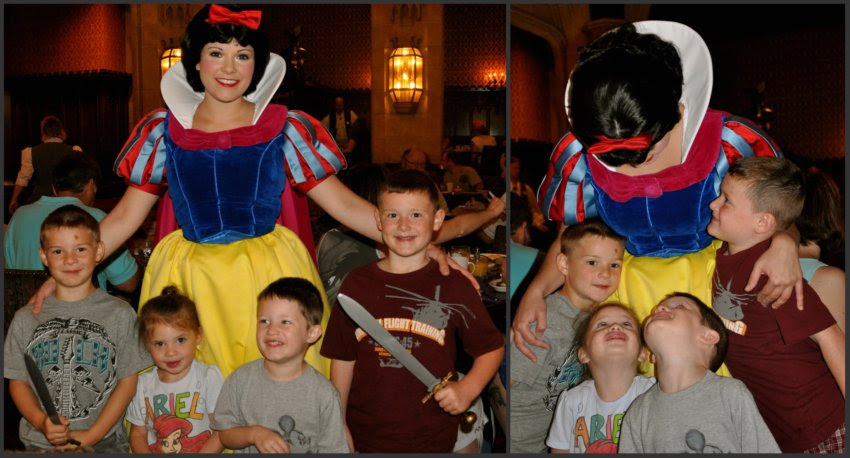 Snow White was the first princess to come to our table 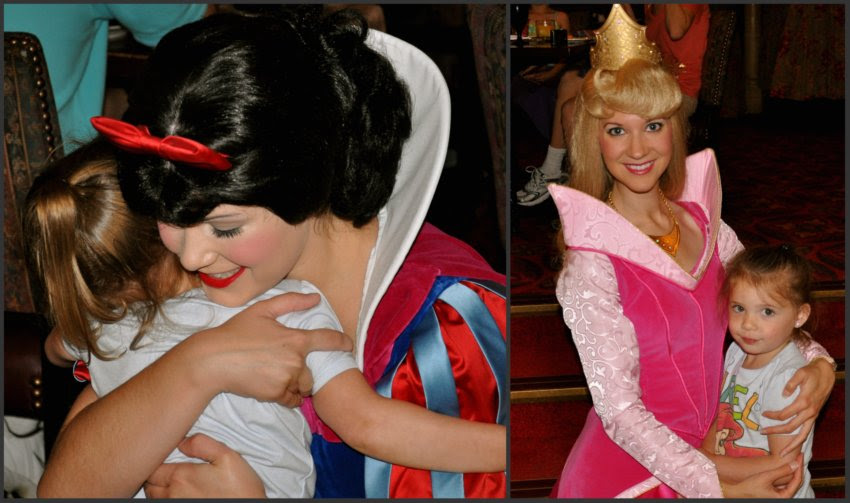 Lexie LOVED meeting all the princesses! 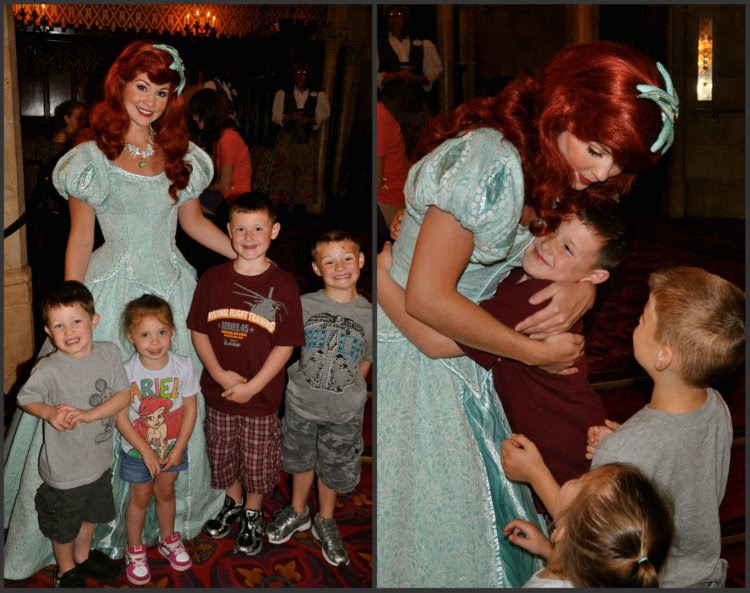 Lexie had on an "Ariel" shirt and the "real" Ariel was so excited!!  Lexie even got a kiss from her favorite princess!! 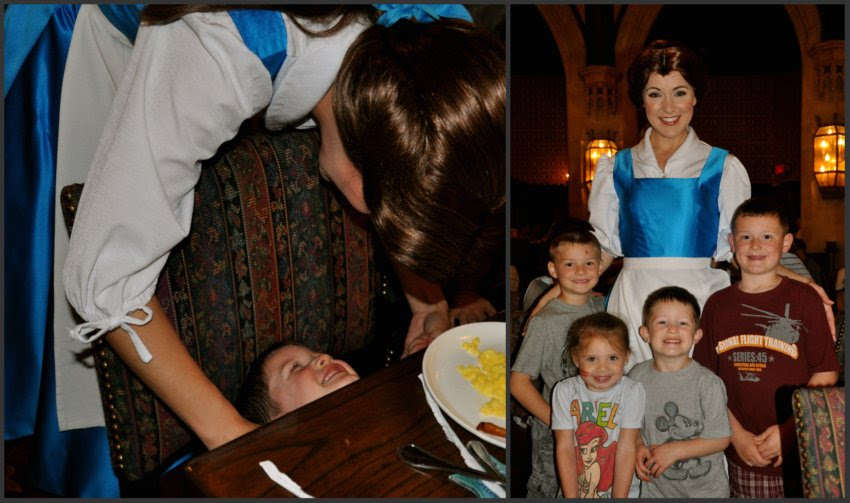 Next up was Belle and she was definitely smitten with Ben.
After our amazing breakfast in the castle (a new family tradition?) we made our way out to the park.  We were a little concerned about our ability to "catch up" as the park had been open for over an hour but we were pleasantly surprised that it wasn't too crowded.  We made our way around the park enjoying rides and collecting as many fast passes as we could for later in the evening. 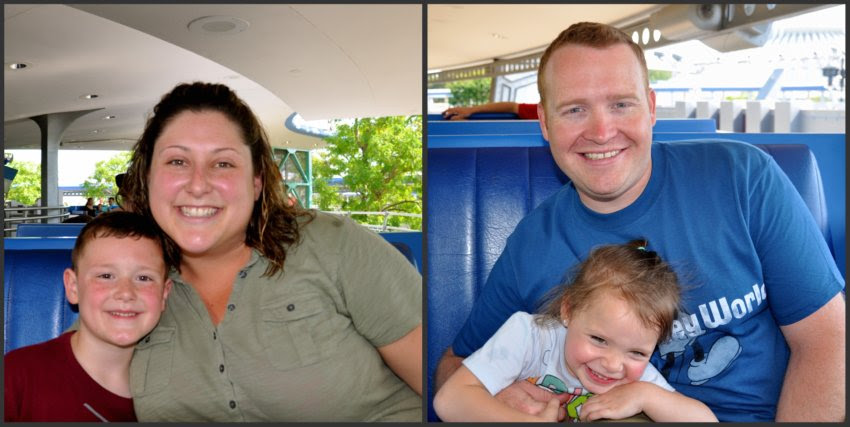 the People Mover-- always a favorite because it goes INSIDE Space Mountain!! 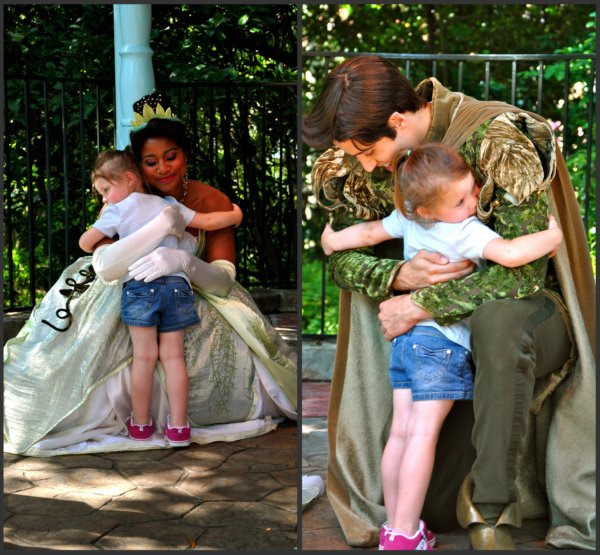 We ran into Princess Tiana and Prince Naveen and Lexie HAD to meet them!
Everyone had a great time exploring the Magic Kingdom.  Christopher's favorite ride was Splash Mountain this time, and he went on it several times!!  Nick was tall enough for Space Mountain on this trip and it became his new favorite ride (along with the Carousel of Progress).  Ben and Lexie really liked Pirates of the Caribbean.
Right before the fireworks we got to watch the new "Magic, Memories, and You!" show that's projected onto the castle.  The entire castle comes alive with movement, color, and characters all set to an amazing soundtrack.  And 500 pictures of guests from the Magic Kingdom THAT DAY are incorporated into the show (no, we didn't see any pictures of us). 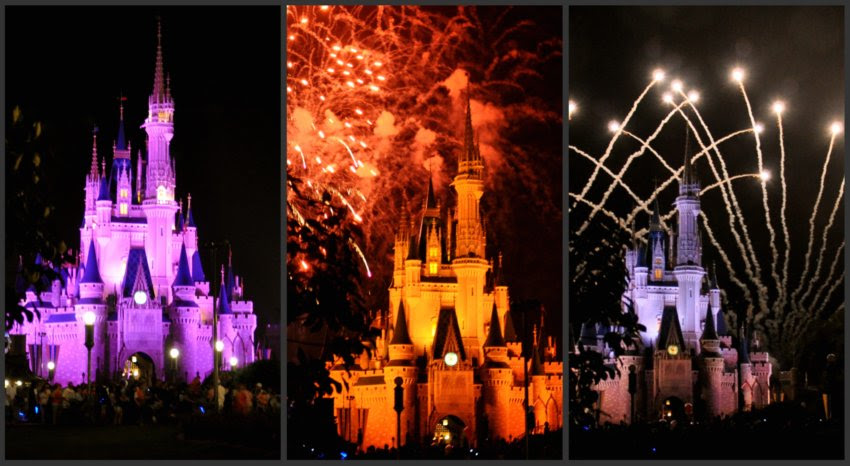 "Wishes" fireworks over Cinderella's castle
After the fireworks we headed over to Big Thunder Mountain and Splash Mountain to use up fast passes and ride a few times.  Grandma volunteered to take Ben and Lexie (who were too short) and go find spots for the Electrical Parade.  We met up with them right before the parade started.
Ever since I was little the Main Street Electrical Parade has been a huge part of the magic of Disney and I was very excited to be able to share this magical experience with my kids this time!  Grandma saved us great seats for the parade and we all had a fantastic view!! 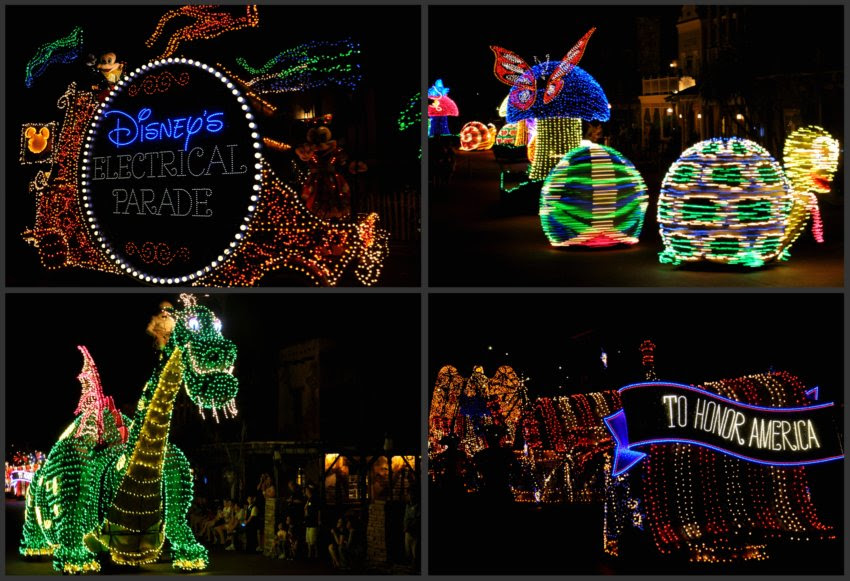 Electrical Parade
After the parade we went on Big Thunder Mountain and Splash Mountain one last time before making our way towards Main Street.  It was close to midnight when we got there and the Magic Kingdom was almost empty already. 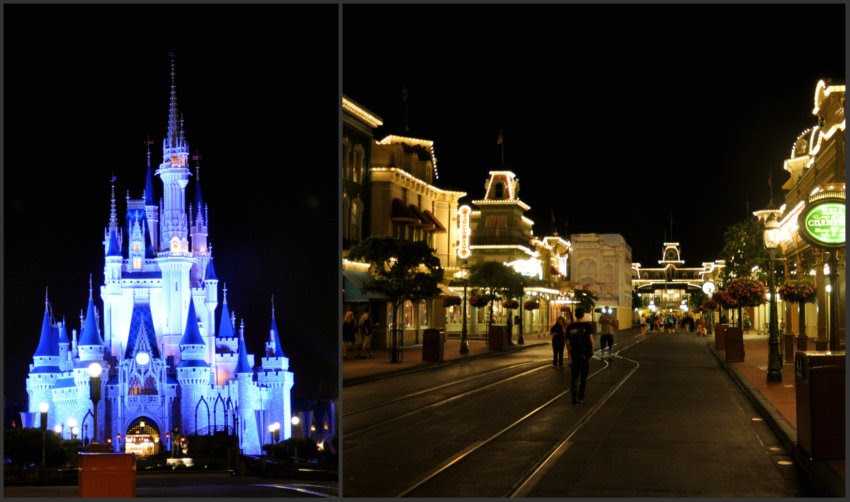 the castle and Main Street
Back when Jacob and I first went to Disneyland together (oh, 12 years ago) we started a tradition of getting ice cream from the Main Street Ice Cream Parlor on our way out of the park and we've kept this tradition every time we go to Disneyland or the Magic Kingdom.  Those of us that were awake (everyone but Ben and Lexie) got an ice cream cone to enjoy on an empty Main Street. 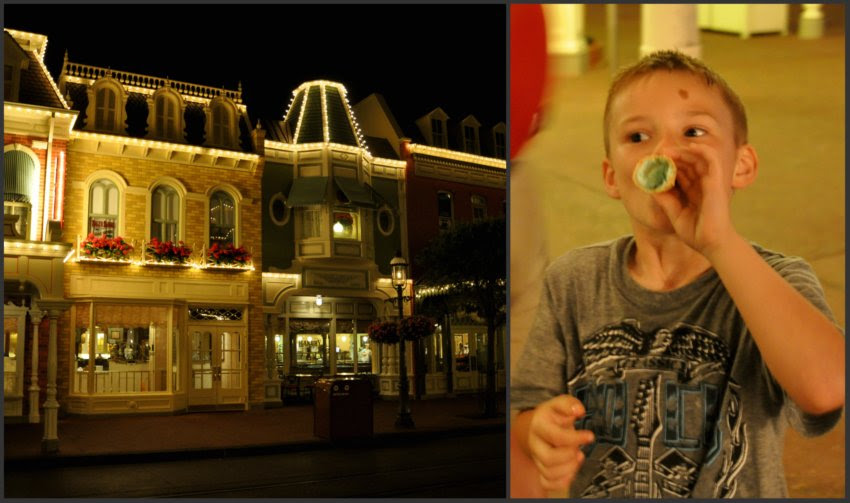 Ice cream on Main Street
We were talking to a cast member while we were eating our ice cream and he was thoroughly impressed with our Disney dedication (we'd been at the Magic Kingdom for the past 17 hours!!).  Once he heard that Christopher was doing a report on Walt Disney (and Disney World) for school he grew even more excited and said he had something for us.  He went into an office and came out with a book all about the history of Disney World for Christopher to use in his report.  We thanked him profusely and made our way to the cars.  Yet another benefit of being in the first row of cars in the parking lot is that you don't have to walk very far at the end of the day!! 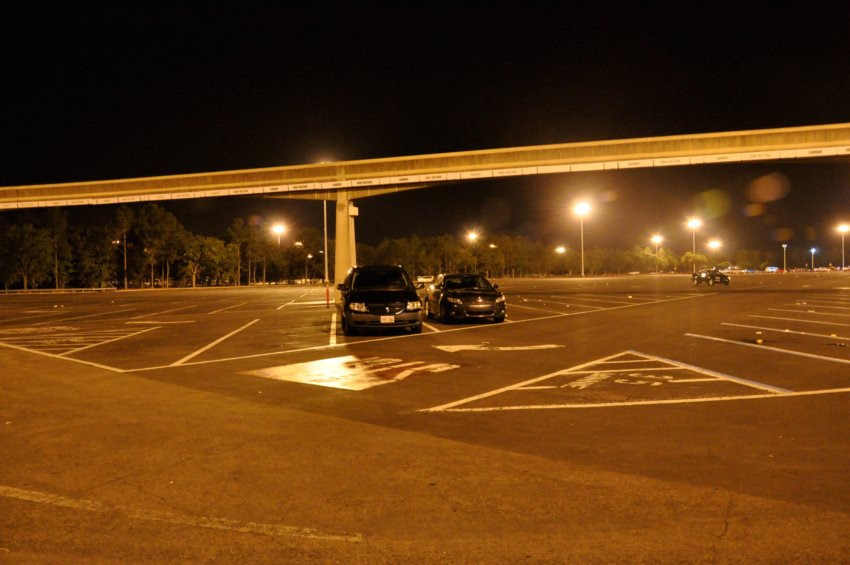