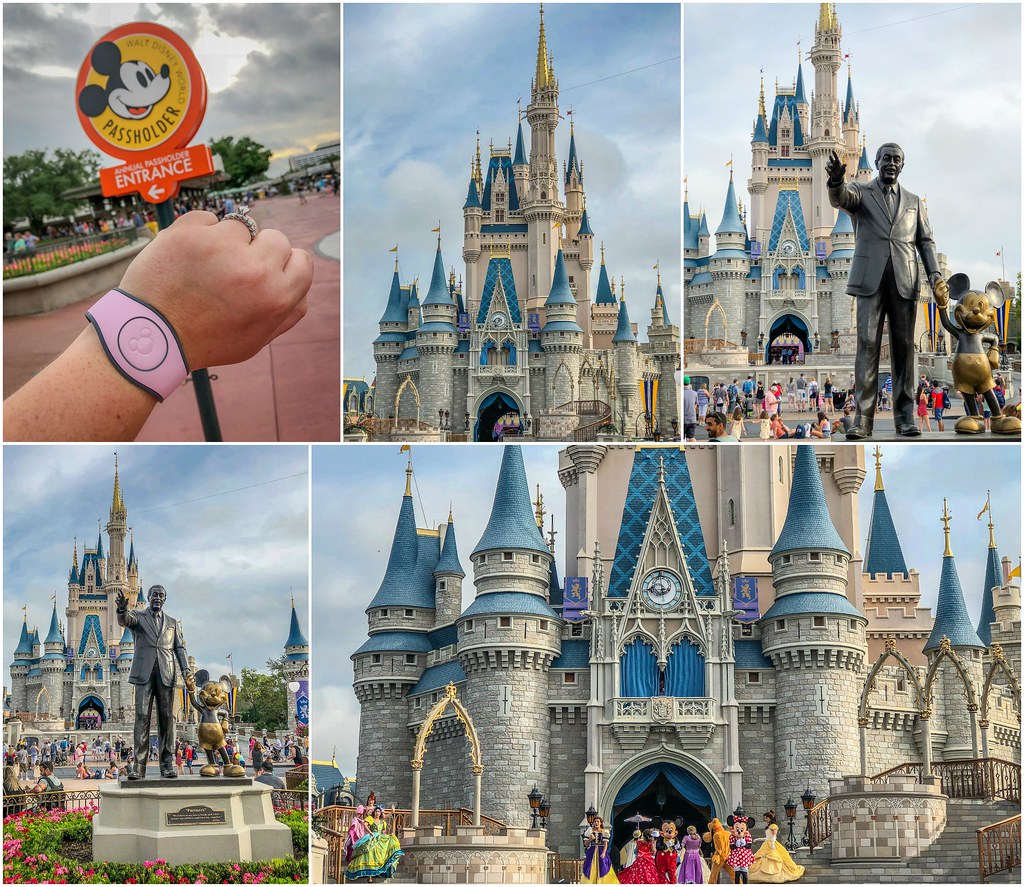 We spent our last day at Magic Kingdom and we arrived bright and early!  Even though the park officially opened at 9am, they opened up Main Street at 8am so people could shop or grab a cup of coffee.  After using the Passholder line (the little perks make us happy!!) we made our way towards Cinderella Castle to get a spot to watch the Welcome Show. 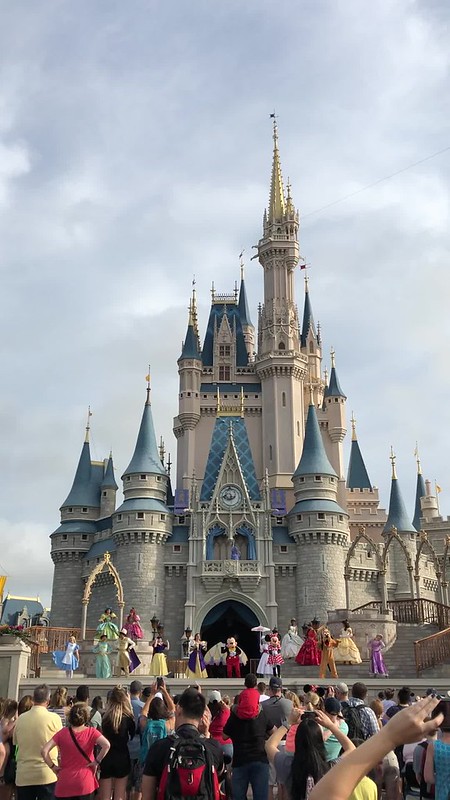 - Jungle Cruise, Haunted Mansion, the new Buffalo Chicken tots from Friar's Nook, and Under the Sea -

While the weather started out fairly nice, big thunderstorms filled the afternoon forecast.  We snagged a great spot on the curb for the 3pm Festival of Fantasy parade and then secretly hoped for the storm to move in and the Rainy Day Cavalcade (also known as the Rainy Day Parade) to take its place.  We chatted with the Cast Members as we waited-- they were also hoping for the Rainy Day Parade as none had seen it yet.

It sprinkled for about thirty seconds and then started POURING!!  We quickly opened up our ponchos, got covered up (some of us had them on backwards at first!), and held our curb.  The Cast Members said that we looked like the three fairies (Flora, Fauna, and Merryweather) from Sleeping Beauty and after awhile, we had our own little crowd of CM's to hang out with.  Every 15 minutes there was an announcement that due to the storms, Festival of Fantasy would be delayed, and we kept waiting for the announcement switching to the Rainy Day parade.

Our fun little group of CM's all chipped in and bought us a Mickey balloon and then offered to take pictures of us (while still holding our curb!) in front of the Castle.  After several delayed parade announcements, and a whole lot of fun and laughing on our part, one of the CM's asked us if we'd like to give up our curb spot and move to the VIP Parade seating on the Liberty Square Bridge and of course, we jumped at the chance!

They went and got towels to dry the benches off for us and then we had the most amazing view of the Festival of Fantasy Parade!

Because we were in VIP seating, the character interaction was amazing!!  Everybody wanted to talk to us and waved and smiled!

Under the Sea!!  We got high fives from the performers as they passed by. 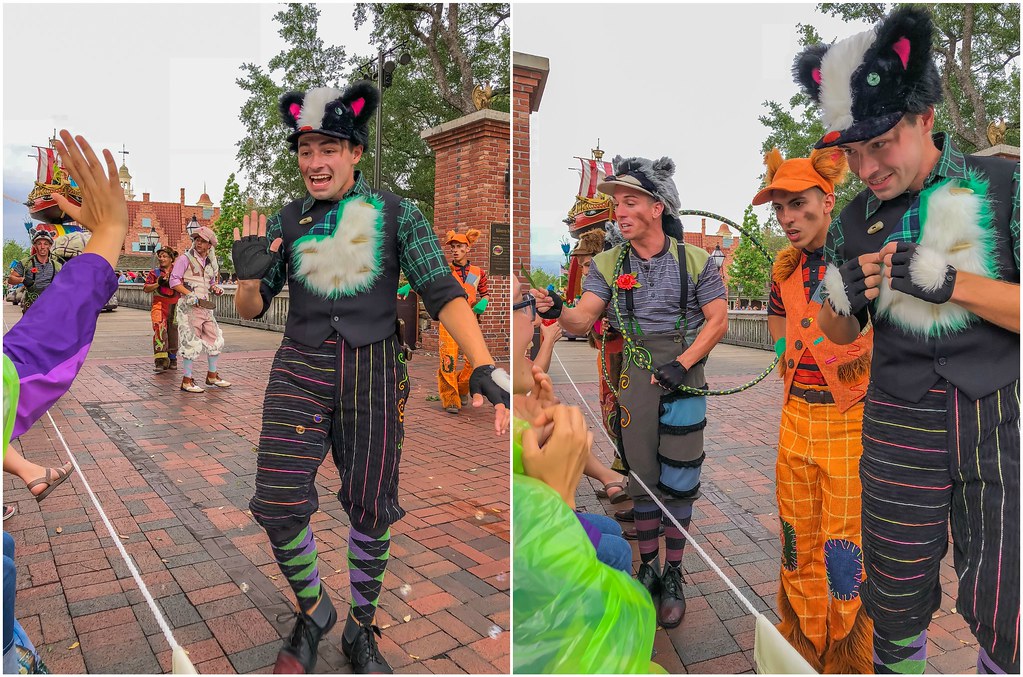 The Lost Boys were particularly enamored with our group!

Off to Neverland!  Peter Pan and Wendy were so excited that we were wearing matching colors! 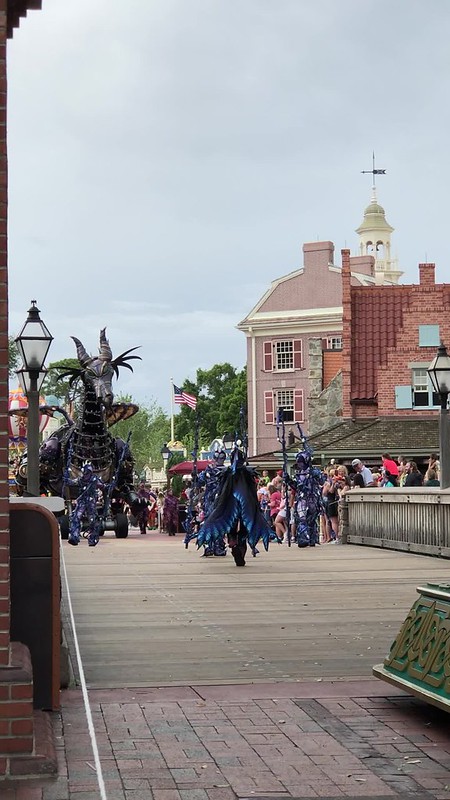 Prince Charming and Maleficent coming over the bridge.

The Maleficent Dragon is one of my absolute favorite parts of the parade!

- Brave and Snow White.. and six of the seven Dwarfs - 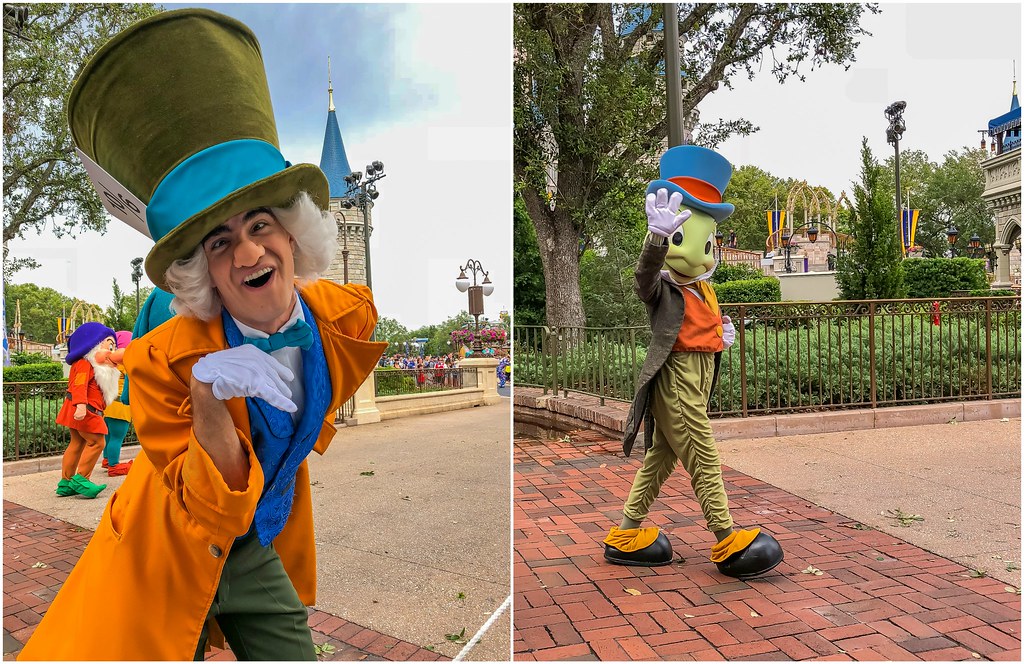 - the Mad Hatter and Jiminy Cricket - 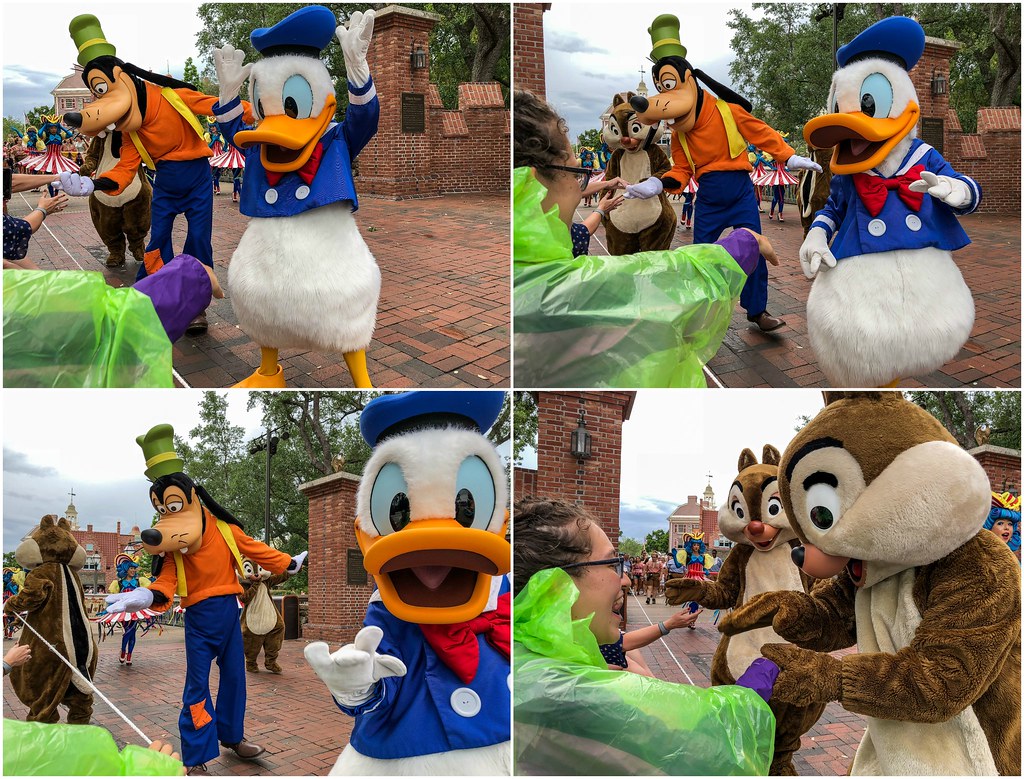 Handshakes and high fives at the end of the parade!

I snapped a few pictures of Abigail with our Mickey balloon before we passed it on to a little kid.

We enjoyed a delicious dinner at Skipper Canteen-- another first for all of us and one that we'll all repeat on future trips! 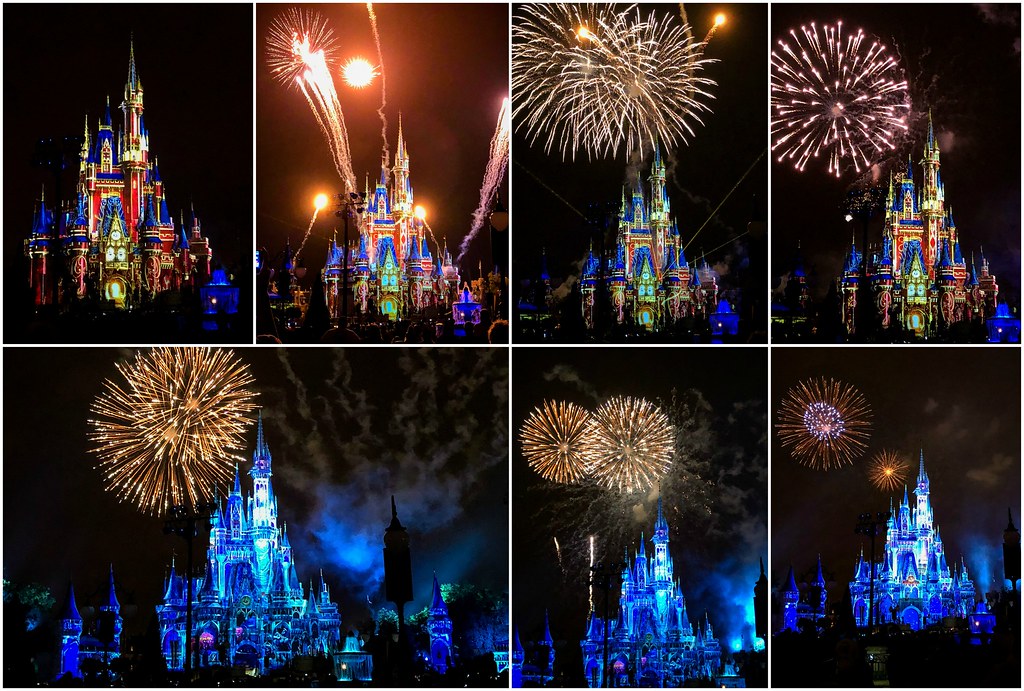 The rain did a great job clearing out the park so we were able to easily get a spot on the hub grass to watch Happily Ever After. 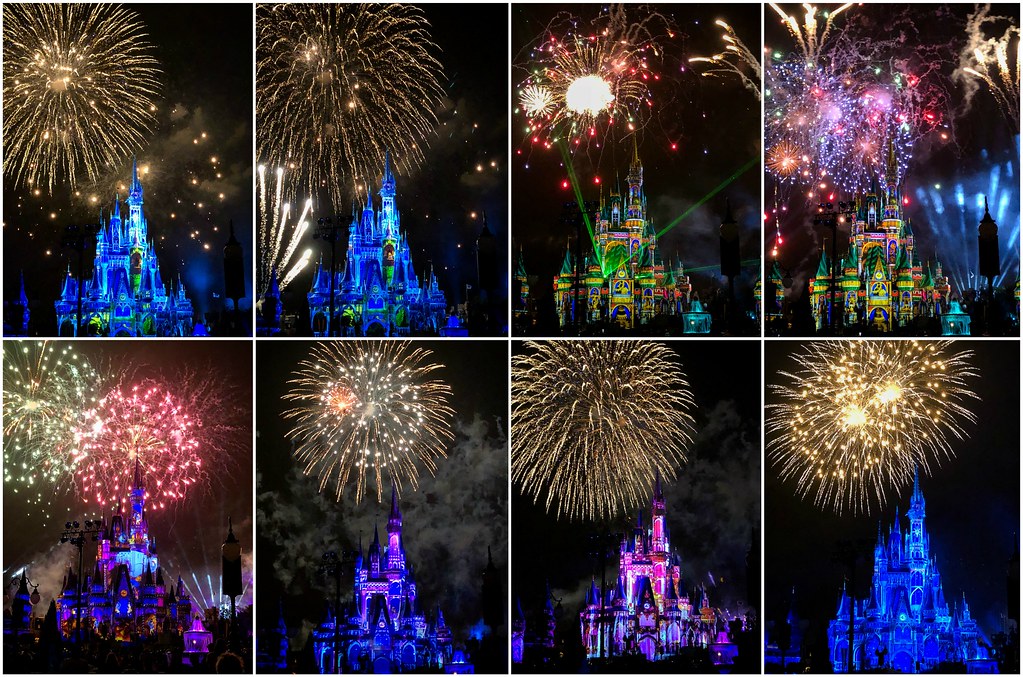 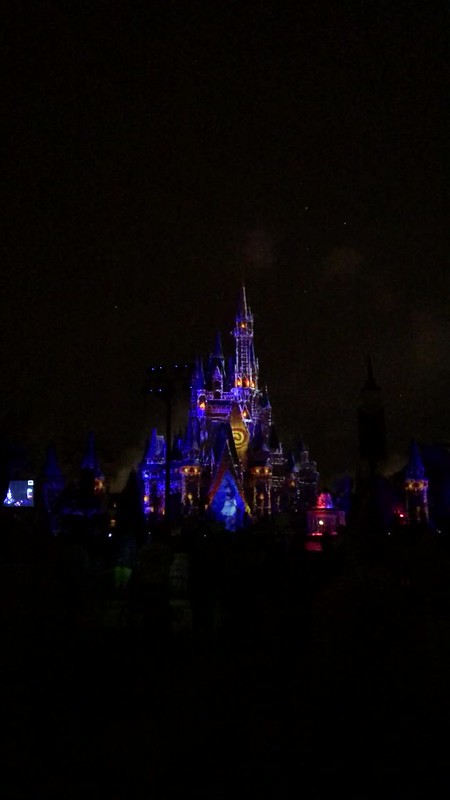 The projections are one of the best parts of this new show! 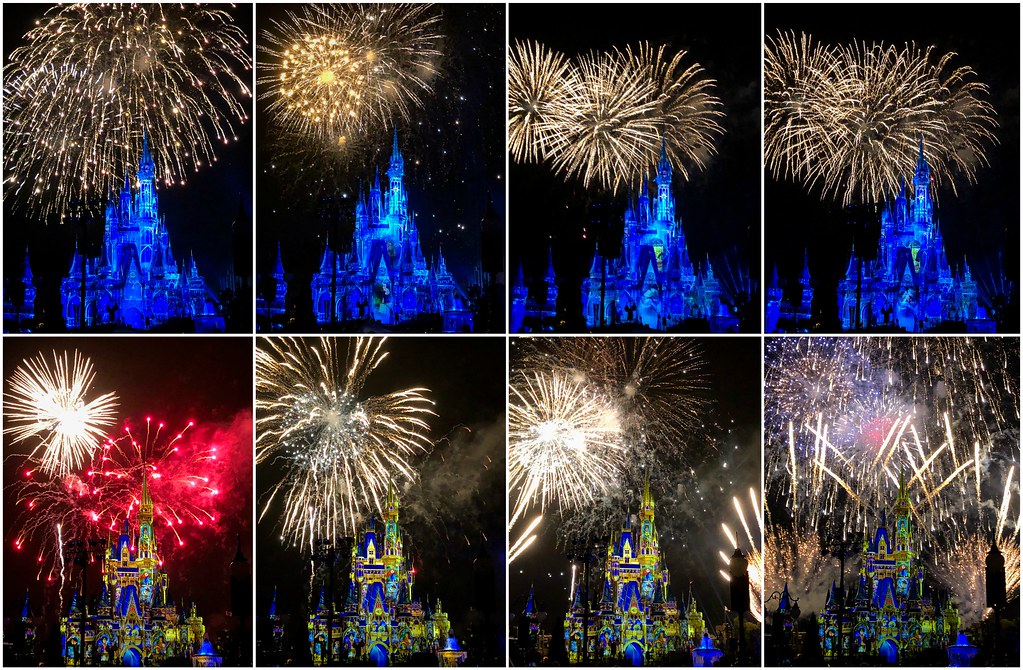 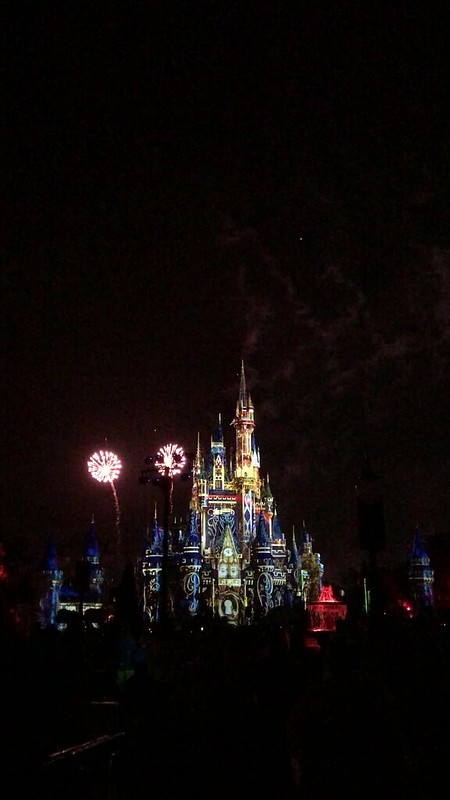 After the fireworks, we headed to Fantasyland and rode Peter Pan, It's a Small World, the Little Mermaid and Seven Dwarfs Mine Train (THREE times!!) in a little less than an hour!  Once the park closed, we slowly made our way to the front after stopping to take pictures of the Castle one last time. 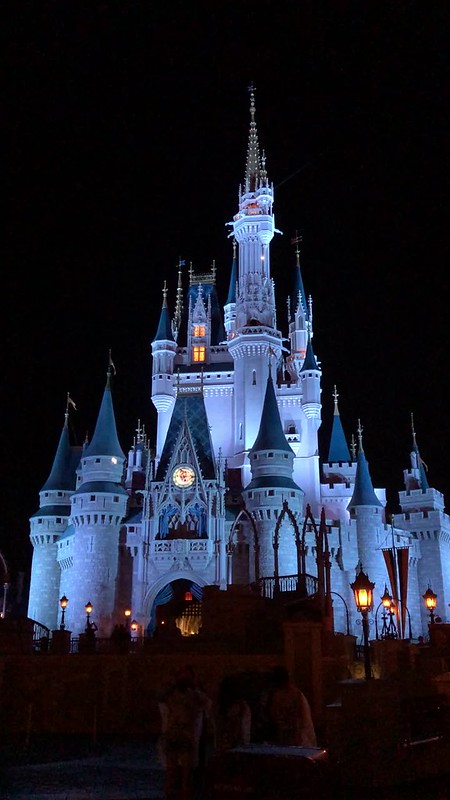