a much needed update

I guess it's been awhile since I've updated!!  We have been really busy with my parents in town for the past week!  We celebrated Nick's 4th birthday and Grandpa's 54th birthday at Jim 'N Nick's BBQ and then came home for cake and presents! 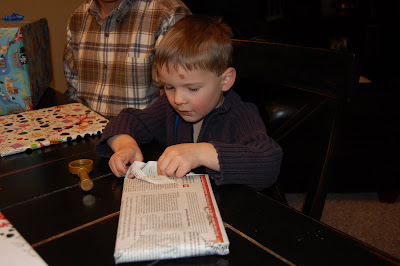 Nick opening presents (Mommy ran out of wrapping paper!!)
We didn't do a whole lot while my parents were here.  We went to the mall a few times, and we went to Target MANY times!!  Christopher has been on a quest for a particular Cars toy so we went to about 10 different Targets!  Luckily Grandma and Grandpa found the toy at a Target in Arizona when they got home!!
We went to the "Orange Park" to play.  Unfortunately it was VERY windy so we didn't stay very long!  I think we've gone to the "Orange Park" just about every time my parents have come out over the last four years. 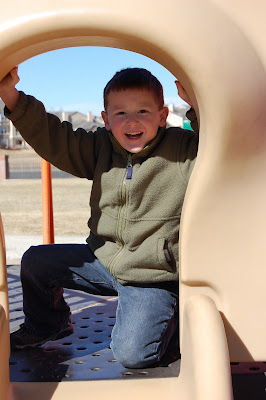 Christopher likes posing for the camera. 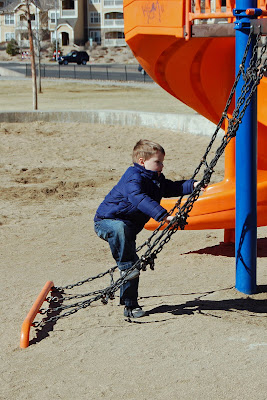 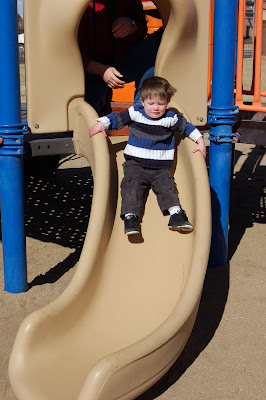 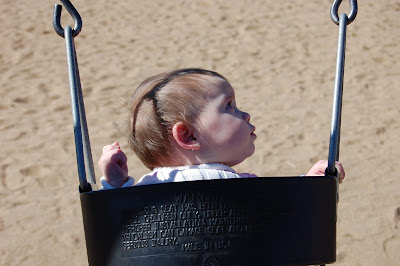 And Lexie doesn't really care either way about anything at the park!!
We went to Buckley Air Force Base to check out the BX and the commissary as well as get an idea of what the base housing is like.  We knew that President Obama was in Denver that day but were unsure if he landed at Buckley or DIA.  We were driving around the base and saw Air Force One behind the hangars.  Then, as we were pulling out of the BX parking lot to leave we realized that the base was on lockdown.  We sat there for about 15 minutes and then saw Air Force One takeoff.  As soon as it was in the air, the gates reopened and we were able to leave.
I've had the opportunity to talk to Jacob several times in the past week.  Last Sunday he had a 4-hour pass again!  My parents took Christopher and Nicholas to go see "Hotel for Dogs" (a big hit for 4-5 year olds!) so I had a few uninterrupted hours to talk to Jacob.  They qualified on their rifles the week before and that went well.  It was a very busy week and they were at the range for 12+ hours a day!  Then on Monday he had an all-day pass due to the President's Day holiday.  He took a couple of naps and we were able to email/chat throughout the day!
He was also able to call last night.  They went through their grenade training this week and threw live grenades on Friday.  He said it was a huge adrenaline rush (you only have 3 seconds!) and his favorite thing they've done so far.  They also got to shoot the .50 caliber machine guns and use the RPG (rocket propelled grenade launcher).  Because his group qualified at 97% on their rifles (an almost unheard of number) they are being rewarded with a pizza party and the UFC fight tonight.
As of yesterday, they are also officially in "Blue Phase" or "Warrior Phase" which is the culmination and the most challenging of all the training phases.  During the first week, there is a PT final and 150 points are required to pass (Jacob had a 235 on his last one).  Those that pass will move on to "Bivouac" (camping) and FTX (Field Training Exercises), such as nighttime combat operations and MOUT (military operations on urban terrain) training.  There is no access to the dining facility during these exercises, so meals are given in the form of either MREs or "hot alphas".  Drill sergeants will make much of this an adversarial process, working against the recruits in many of the night operations, trying to foil plans, etc.  Other BCT companies also in their FTX weeks may join in simulated combat scenarios, generally at night, with intense competition to prover their particular company is the better trained.
Basic training culminates in a special tactical FTX, during which the drill sergeants will advise, but allow recruit platoon leaders and squad leaders to exercise primary decision-making.  They attempt to make virtually every one of these exercises different.  Due to the fact that being a soldier is potentially an extremely hazardous job, recruits must demonstrate extreme aggression and fearlessness, tempered by intelligence and common sense.  Only those that demonstrate these vital attributes will be permitted to move on to AIT.
Posted by Jennifer at 7:41 PM