Every six months when Christopher goes to the dentist he asks if ANY of his teeth are loose yet. When he went in December, nothing was loose but our dentist assured him that they would be SOON.  And then in March, Christopher noticed that he had not one loose tooth, but FOUR loose teeth.  So he wiggled and wiggled and wiggled, but nothing happened.

About a month ago I realized that his permanent teeth were growing in behind his baby teeth, and much further back than they should be, so I called the dentist.  We went in the next day to get it checked out and they decided to pull some teeth.

Christopher wasn't nervous at all and was VERY excited that he'd FINALLY have some teeth to put under his pillow.  I don't think he quite understood the process of pulling teeth and he hopped in the dentist's chair with a smile.  They used a topical numbing cream and then gave him about seven shots (which he NEVER noticed and I don't think he even knows they did-- which is good-- he gets hysterical with shots).  Then they pulled out the bottom two center teeth.  After those were out they realized there still wasn't quite enough room on the bottom so they ended up pulling all four bottom incisors. 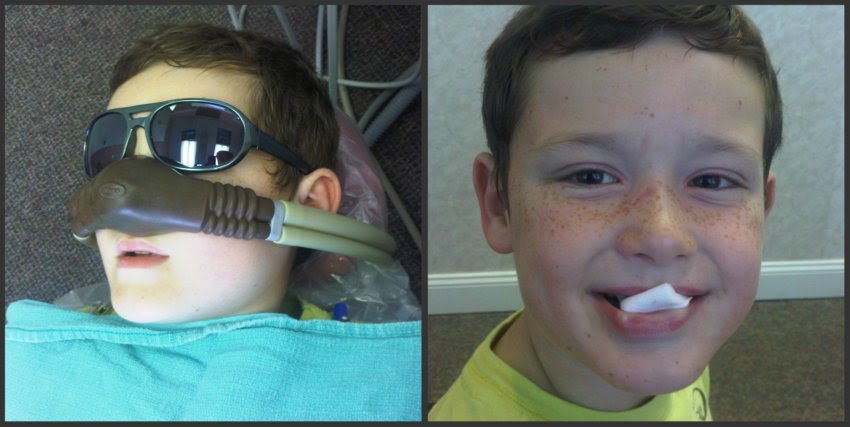 Christopher relaxing with the laughing gas.  Still smiles even after the teeth are out!
Christopher did great with the whole thing and was VERY excited to show Daddy his toothless mouth when he got home from work!  And even more excited to put FOUR pulled teeth under his pillow-- because you know the Tooth Fairy pays WAYYYYY more when the dentist pulls the teeth!!
About a week before Christopher's teeth were pulled, Nicholas realized that he also had a permanent tooth growing in on the bottom and a loose bottom tooth.  He wiggled and wiggled and wiggled, and a couple of days after Christopher's teeth, Nick lost his first tooth-- though I had to pull it!  Now the Albaeck house is full of toothless grins!! 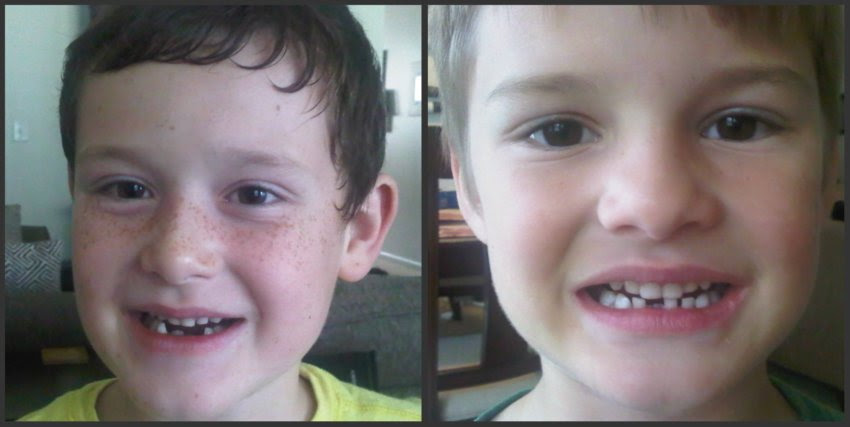 Christopher missing four and Nick missing one!
Posted by Jennifer at 8:28 AM