We woke up this morning at 5:30a to 2.5 inches of snow.  I don't think that it's snowed in over a month, yet the morning we're leaving, it's snowing heavily!  I got everyone up and loaded into the car.  We made a quick stop at Starbucks before hitting the road.  The first hour or so of our drive was on a sheet of ice.  The weather report warned that people should stay off the "treacherous roads".  The second hour was blowing snow with horrible visibility.  The first two hours of the drive were at about 40mph instead of the posted 75mph putting us about an hour behind on our ten hour drive!!  Luckily, the weather cleared up after the first two hours. 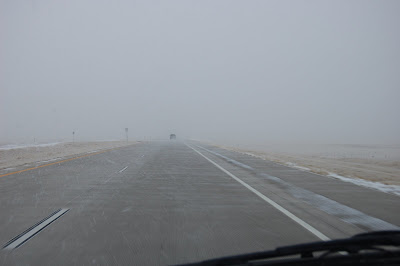 When I say "cleared up" I mean overcast and lightly snowing.
We stopped at a McDonald's in Burlington, CO for breakfast.  The boys and I had Sausage McMuffins, and Lexie had her first McDonald's pancakes!!  As of this morning, it has been 36 hours without a bottle and she's been doing great!!
After our breakfast stop and a quick trip to the gas station, we were back on the road.  We listened to the Cars soundtrack on my ipod for the next 4 hours.  We made our way through Kansas and stopped for lunch at yet another McDonald's, this time in Salina.  We ate a quick lunch and the boys ran around for awhile and we were back in the car!!
I explained to everyone that after lunch we were going to play for awhile and then it would be time for a nap.  So everyone played nicely for 30 minutes.  Then Lexie fell asleep, then Ben fell asleep.  I told Christopher and Nicholas to put the toys down and either look out the window or take a nap but they had to be quiet.  Nick promptly fell asleep.  Then, Christopher started having a meltdown about how he didn't want to take a nap!  And he was LOUD!!  Ben woke up and started poking Lexie, Lexie woke up and started shrieking, and the shrieking woke Nick up.  Christopher fell asleep about 5 minutes later and slept for the next hour and a half while the other three made all kinds of noise!!
Eventually everyone was awake and playing and we were listening to the Cars soundtrack again and getting closer and closer to Tulsa.  I noticed a police car on the right side of the road and a car pulled over in front of him.  The car in front was pulling away so I slowed down to let him merge.  As I got closer to the police car the officer swung the door open in front of me and I had to swerve into the left lane to avoid hitting him.  I got pulled over about 2 seconds later.  Apparently, in the state of Oklahoma, if there is any public service vehicle pulled over on the side of the road with its lights on, you are REQUIRED to move into the left lane.  He was nice and let me off with a warning.  We also had a chat about how many kids I have, whether or not their all mine, and that I must be a glutton for punishment....
It was only another 45 minutes or so to our hotel in Tulsa.  Unfortunately the only place to eat by our hotel (other than sit down restaurants) was ANOTHER McDonald's!!  We ended up checking in at the hotel and ordering a pizza.  The kids had a chance to play while I unloaded everything and then we- or at least some of us- sat at the table to enjoy dinner! 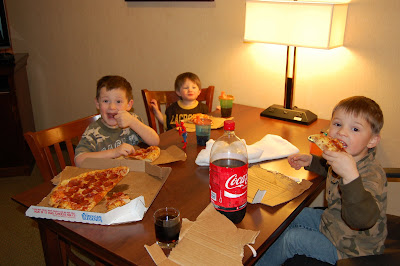 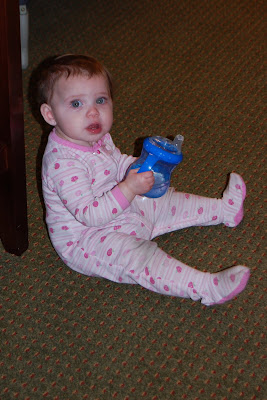 Lexie can FINALLY use a sippy cup all by herself!!  And yes, she had pizza for dinner!
After dinner, everyone got ready for bed.  I will spare you the details of the bedtime ordeal.  It's 11p Tulsa time and Christopher is still watching TV (4 hours past bedtime), Nick fell asleep 5 minutes ago, Ben is sleeping in the bathroom, and Lexie is as cute as ever!!  :) 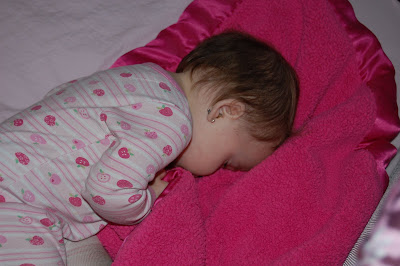