After our fun in Mayberry we headed south to Lexington for some yummy bbq! Now, as any connoisseur knows, Lexington, North Carolina is the Barbeque Capital of the world. :) In a city of seventeen thousand, there are over twenty barbeque restaurants.
In North Carolina, there are two completely different schools when it comes to barbeque: Eastern style and Western style.
In Eastern North Carolina, from Raleigh to the coast, barbeque means a whole hog cooked over the coals and served with a spicy sauce made from vinegar and red pepper pods. In the Piedmont and Western North Carolina mountains, Western style barbeque is king. Western style is pork shoulder, slow-cooked and served with a thin, slightly sweet tomato-based sauce or "dip".
We ended up at Whitley's Restaurant and we were not disappointed!! We had delicious chopped barbeque with barbeque slaw. Barbeque slaw is similar to coleslaw but it's made with ketchup (or tomatoes) and vinegar instead of mayo! Very yummy!! We completely forgot to take any pictures while we were there, so here's one courtesy of slashfood.com. And those are hushpuppies in the back! :) 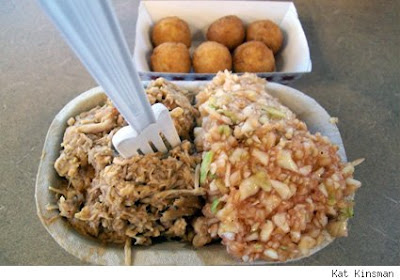 Once we were done with lunch we headed back to the hotel so that Lexie could take a nap. And then it was back out to the streets of Winston-Salem for dinner! We ended up at Kernel Kustard near the hotel which serves hot dogs, sandwiches, frozen kustard, and popcorn! Of course we had to try it all! :) 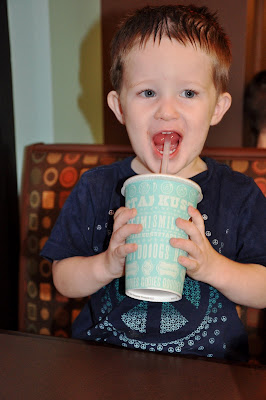 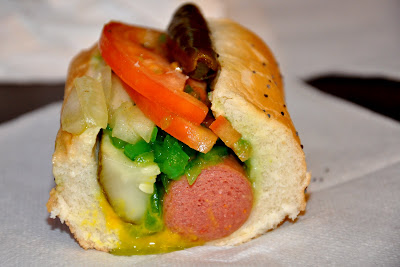 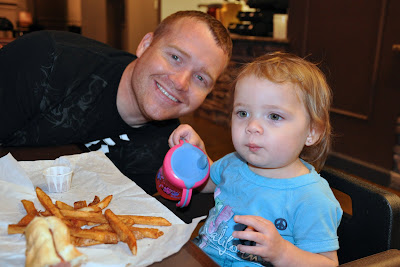 Daddy and Lexie
And after our hotdogs for dinner it was time for kustard!! Christopher and Nick shared a "Cereal Killer" Jumble: Captain Crunch, Fruity Pebbles, and Cocoa Pebbles mixed with vanilla kustard. They thought it was pretty silly!! 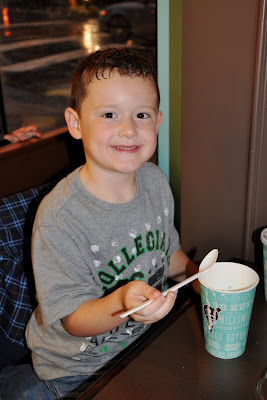 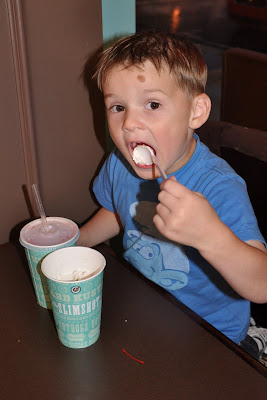 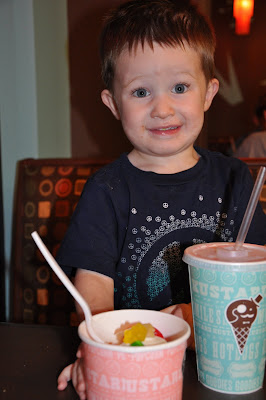 "There are gummy bears in my kustard?!?!"
Jacob had the Buckeye Sundae: chocolate kustard, peanut butter topping, and Reese's peanut butter cups , topped with chocolate whipped cream and a cherry! Lexie and I shared a Kernel Kustard Sundae: vanilla kustard, warm caramel corn, and warm caramel, topped with whipped cream and a cherry! 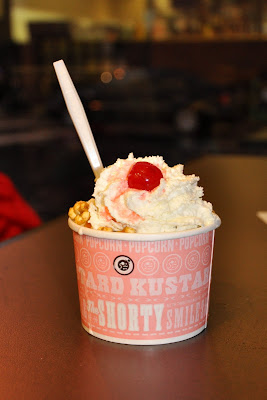 Kernel Kustard Sundae
We bought some popcorn on our way out and walked back to the hotel in the pouring rain! We should really invest in some umbrellas!! :) Everyone was exhausted and headed straight to bed. 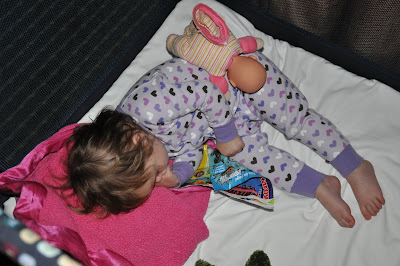 She takes after her Mommy (she's sleeping with a Carrowinds Amusement Park brochure)!!
Posted by Jennifer at 10:18 AM