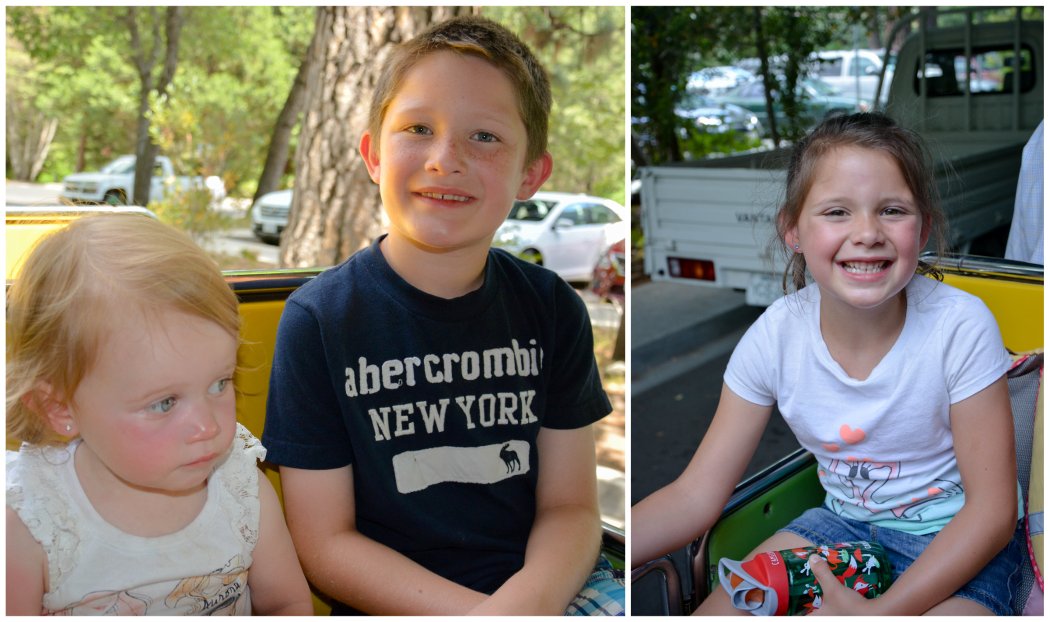 We left San Francisco bright and early in the morning, headed over the Bay Bridge and made the drive to Yosemite National Park.  Knowing that we weren't going to have a lot of time to explore on our own, we booked the Valley Floor Tour before heading out on our trip.

We boarded our open-air tram and set off to learn about Yosemite National Park.  Ellie was excited to sit on the bench with Lexie. 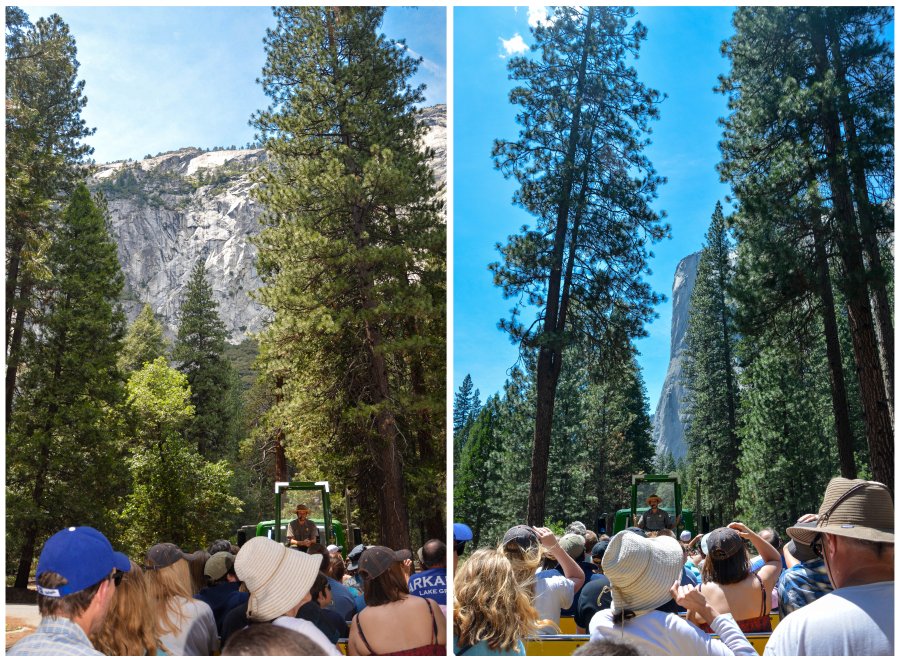 The two-hour tour hits the highlights of Yosemite and introduced us to a lot of places we would like to explore in the future.

Yosemite Park is a place of rest, a refuge from the roar and dust and weary, nervous, wasting work of the lowlands, in which one gains the advantages of both solitude and society.  Nowhere will you find more company of a soothing peace-be-still kind.  Your animal fellow beings, so seldom regarded in civilization, and every rock-brow and mountain, stream, and lake, and every plant soon come to be regarded as brothers; even one learns to like the storms and clouds and tireless winds.  This one noble park is big enough and rich enough for a whole life of study and aesthetic enjoyment.  It is good for everybody, no matter how benumbed with care, encrusted with a mail of business habits like a tree with bark.  None can escape its charms.  Its natural beauty cleans and warms like a fire, and you will be willing to stay forever in one place like a tree. -- John Muir, 1938 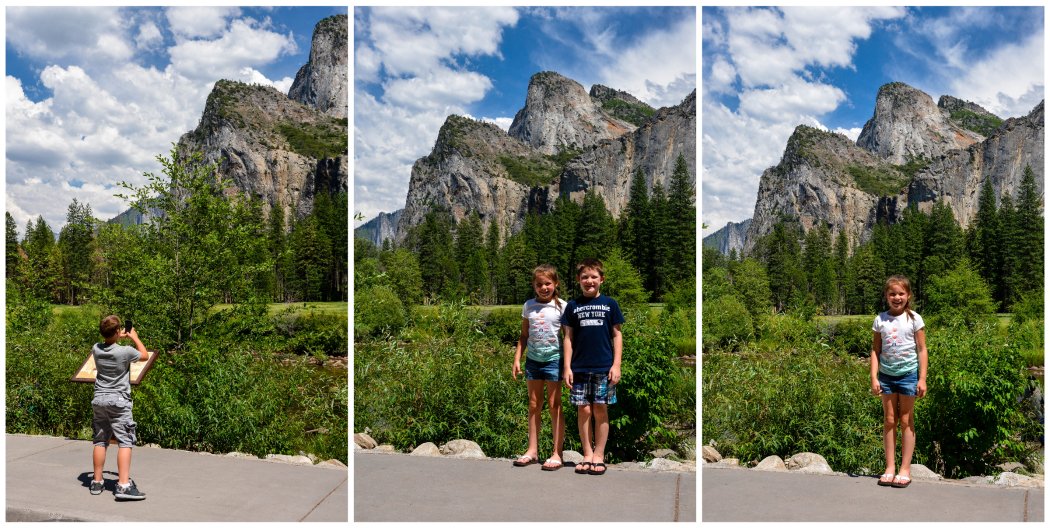 We took LOTS of pictures and just changed the configuration of kids.  Even Nick got in on the picture taking action! 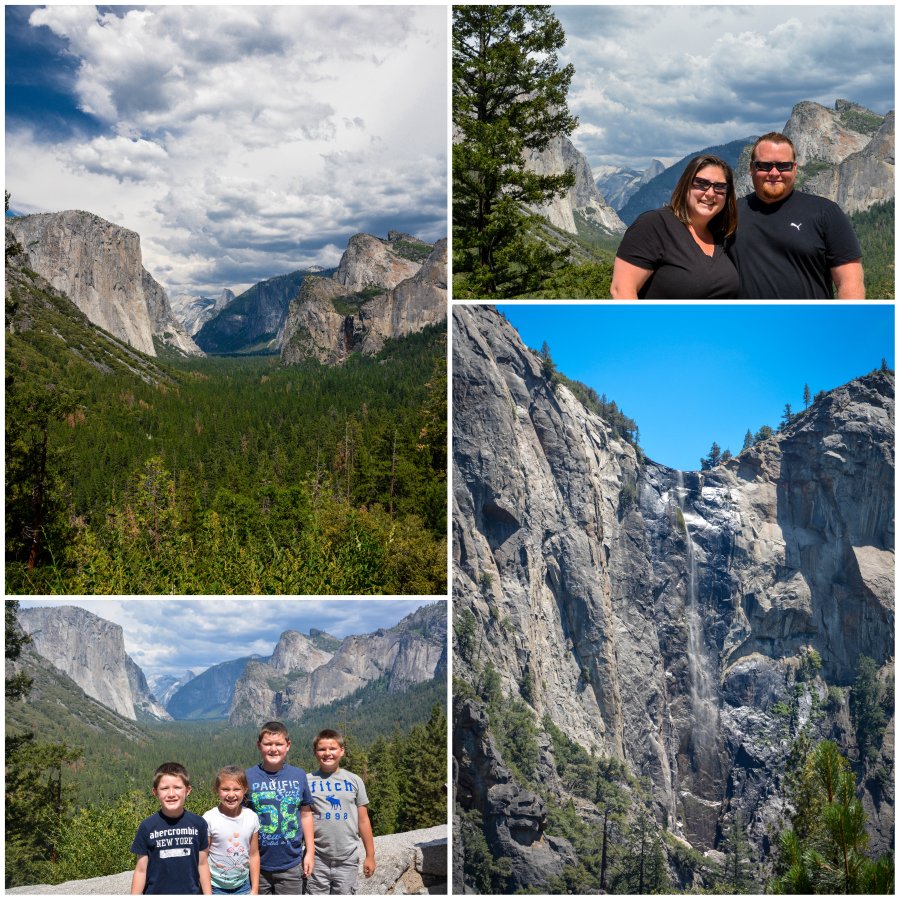 It was too sunny (and HOT!!) out to get good people pictures, but we tried anyways.  The kids were excited to glimpse Half Dome in the distance-- they recognized it from OS X Yosemite.  We caught what was probably the last week of water for the season at Bridalveil Falls.

No synonym for God is so perfect as Beauty.  Whether as seen carving the lines of the mountains with glaciers, or gathering matter into stars, or planning the movements of water, or gardening- still all is Beauty! -- John Muir, 1938 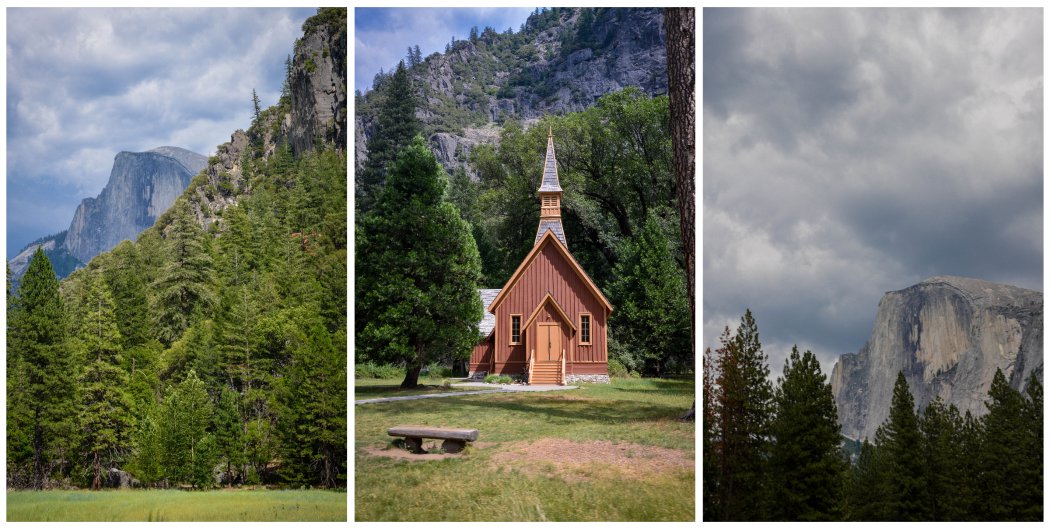 Perhaps the most familiar rock formation at Yosemite, Half Dome, stands almost a mile higher than the valley floor, at an almost 9000 foot elevation.  The Yosemite Valley Chapel, built in the late 1800s, stands at the base of these impressive peaks.

There were beautiful vistas to enjoy in every direction on the tour.  While we could have taken the same route in our van and stopped at the same places, it was so much more enjoyable to have someone else worry about driving and to learn about one of our country's greatest National Parks. 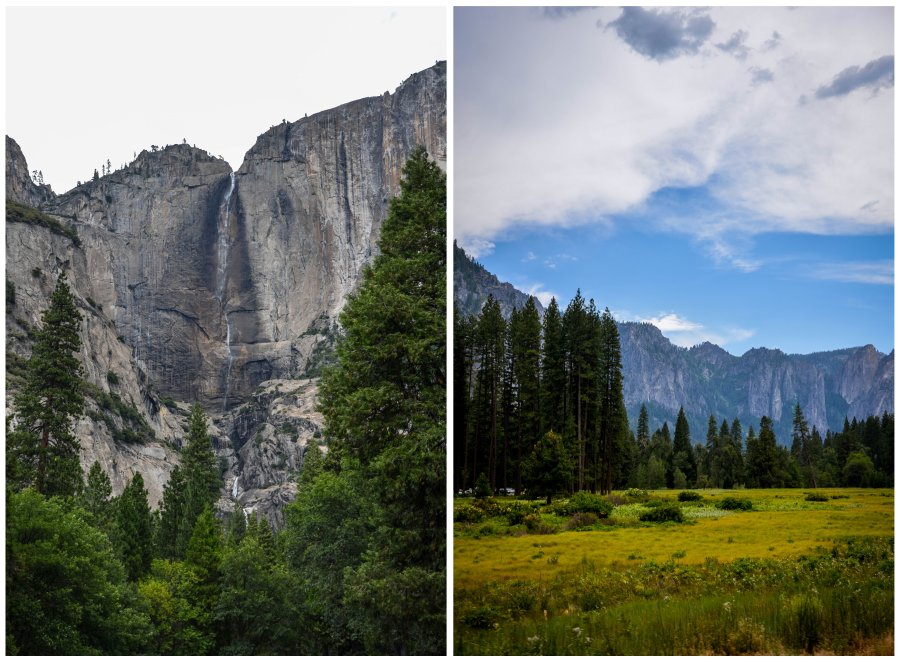 It is by far the grandest of all the special temples of Nature I was ever permitted to enter -- John Muir, 1868 (about Yosemite) 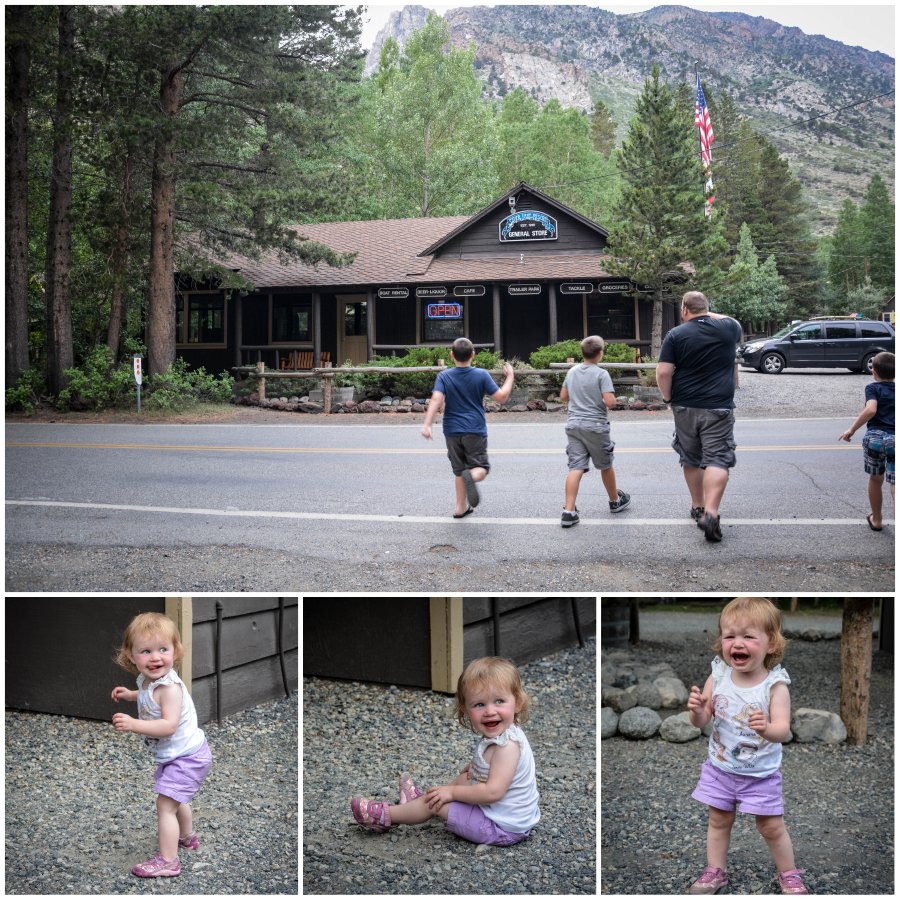 After a slow drive out of Yosemite due to construction (and a completely obnoxious eight year old), we made our way east and stopped at Silver Lake where Jacob's grandparents camp every fall.  We walked across the street from the General Store, called them on the phone, and then waved at the camera on the building so they could see us!  The kids thought it was pretty cool that they could see us even though we couldn't see them.  Playing in the gravel parking lot was the highlight of the day for Ellie and she cried hysterically when she was forced to stand up and leave.

Our next stop for the evening was dinner at the Tiger Bar in the cute town of June Lake.  It's one of Jacob's family's favorite places to eat while they're camping so we had to check it out and we were not disappointed! 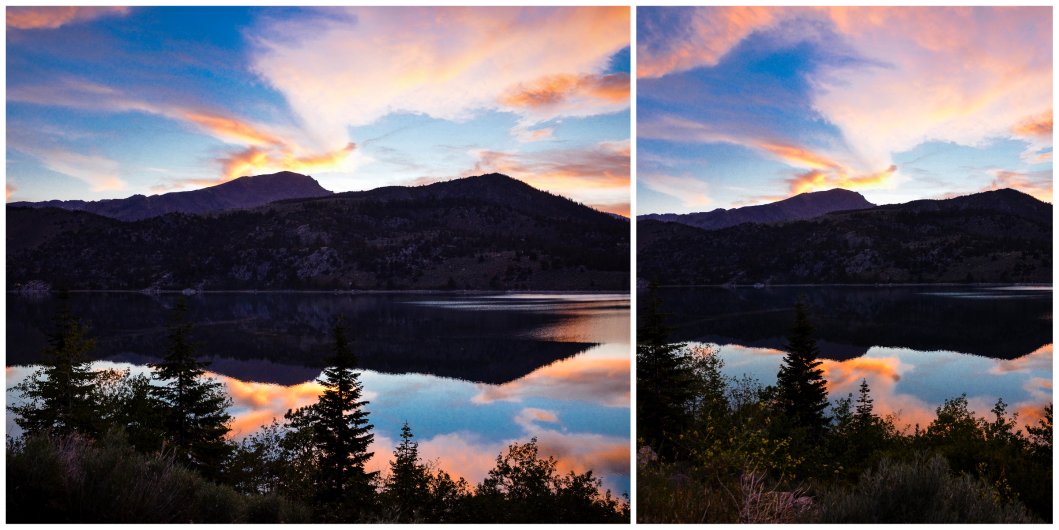 June Lake-- we were treated to a gorgeous sunset as we made our way around the lake. 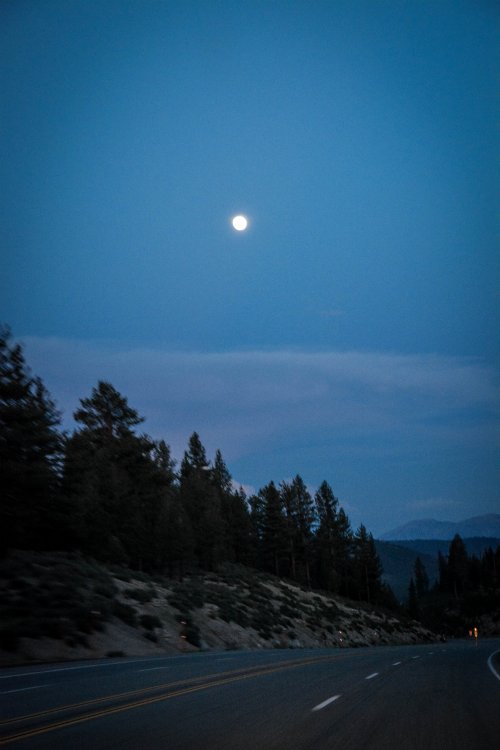 After leaving the June Lake area, we made the drive to Bishop under an ALMOST full moon.  Luckily, the kids slept most of the way since it was so late at night and they went straight to bed when we got to the hotel.  It was a long, hot day, but we all had a great time exploring the Sierras.