In November we surprised the kids with a quick trip.  We were originally planning to leave right after school but they'd been complaining that they NEVER get picked up from school early (NEVER-- not even for doctor's appointments) so Jacob swung by and got them all a couple of hours before school was out for the day.  None of them knew why they were getting picked up and their imaginations started to get the best of them.  By the time he got home with the kids, they were convinced that they got picked up early to go get shots for some new infectious disease that we were concerned about.

We loaded everyone into the car (and luckily they didn't notice the luggage in the trunk) and headed south.  We drove for about 2.5 hours before stopping at a Ruby Tuesday's for dinner in South Carolina.  The kids kept asking what we were doing and where we were going and if they'd be going back to school that week (we left on a Tues, there was no school on Wed for Veteran's Day, but school on Thurs/Fri).  We told them that they would have fun but we weren't going to answer ANY questions about where we were going or what we were doing.  We finally compromised and answered the question about whether or not they were getting shots and they were all a bit relieved to find out that no one was getting one.

After dinner we had a few more hours in the car before arriving at our hotel for the night in Kingsland, Georgia.  The kids were all convinced that we were going to Disney World so stopping in Georgia definitely confused them!  After a good night's sleep we were off again and headed to Okefenokee National Wildlife Refuge, about an hour west of Kingsland.

Ellie was excited to be out of the car and happily walked up to the entrance.  The kids were excited to see wildlife as soon as we entered the Visitor's Center-- and signs prohibiting feeding said wildlife!

We perused the Visitor's Center for a bit (and learned that Okefenokee was named by Indians and means "land that trembles when you walk on it") and then got ready for our boat tour of the swamp!

We made our way into the swamp and after about a minute we spotted wildlife-- a woodpecker!

Keeping their eyes open for gators! 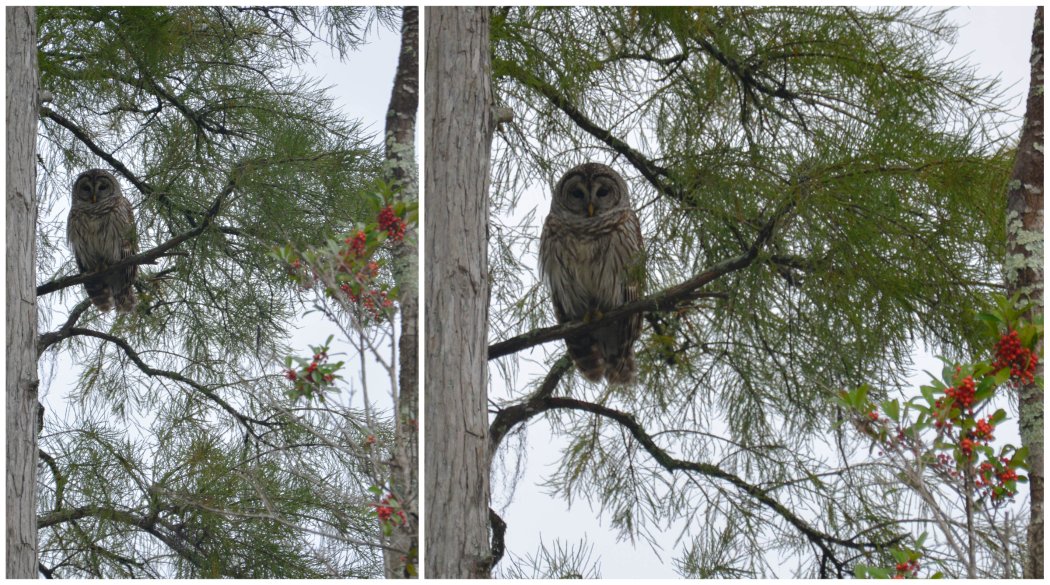 We spotted a barred owl high up in the trees and pulled in for a closer look. 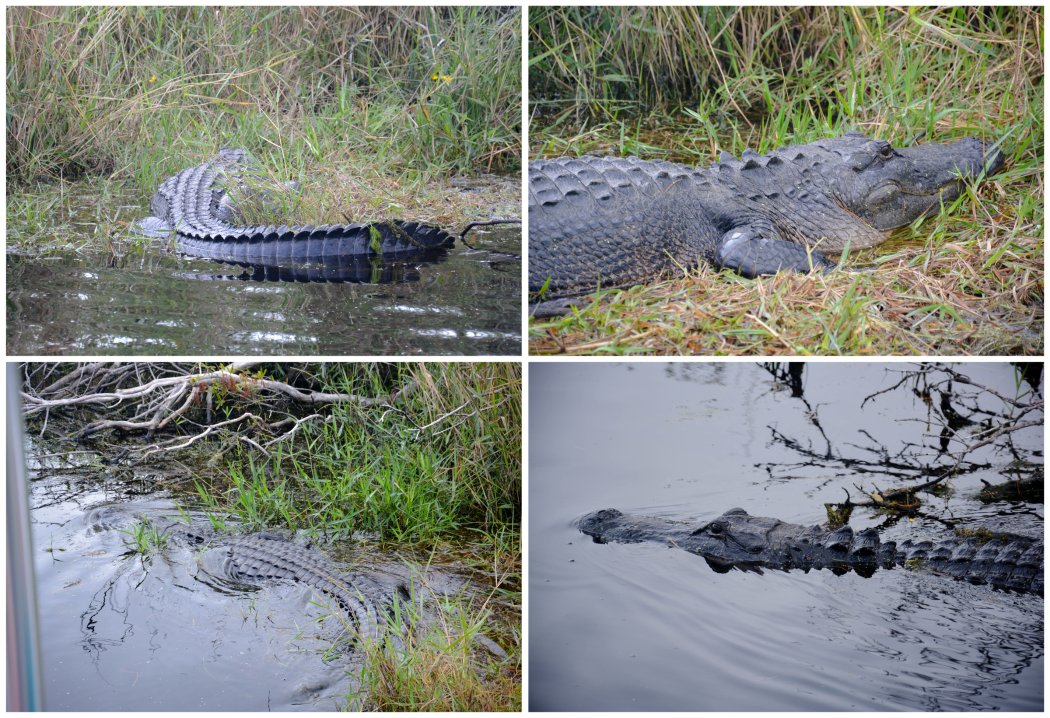 As we made our way deeper into the swamp, we saw more and more alligators.  Our guide would pull up next to them (the metal bar in the bottom left pic is the boat) so that we could get a closer look-- while the gators are used to the boat traffic through the swamp, they are still wild animals and must be respected.

Before this trip, I never would have guessed that a swamp could be such a beautiful place.

We were incredibly lucky to see this group of roseate spoonbills as Okefenokee Swamp is not their natural home-- they must have just been passing through!

Fall in the swamp

These two girls had so much fun looking for gators-- notice the one behind Lexie's head! 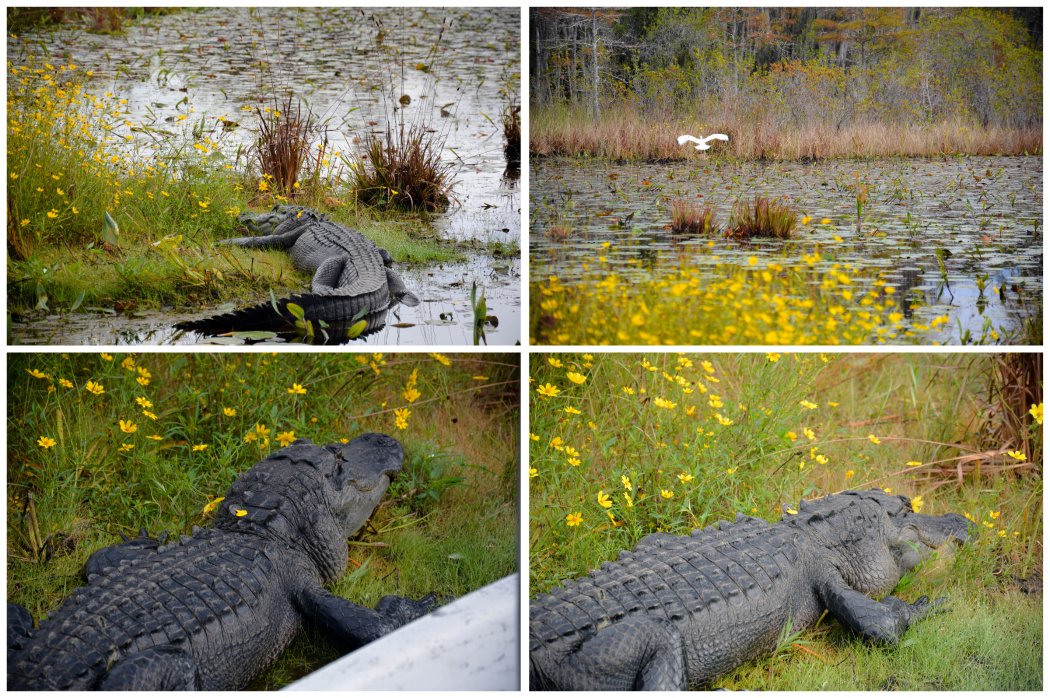 A sweet alligator resting in a bed of tickseed sunflowers. 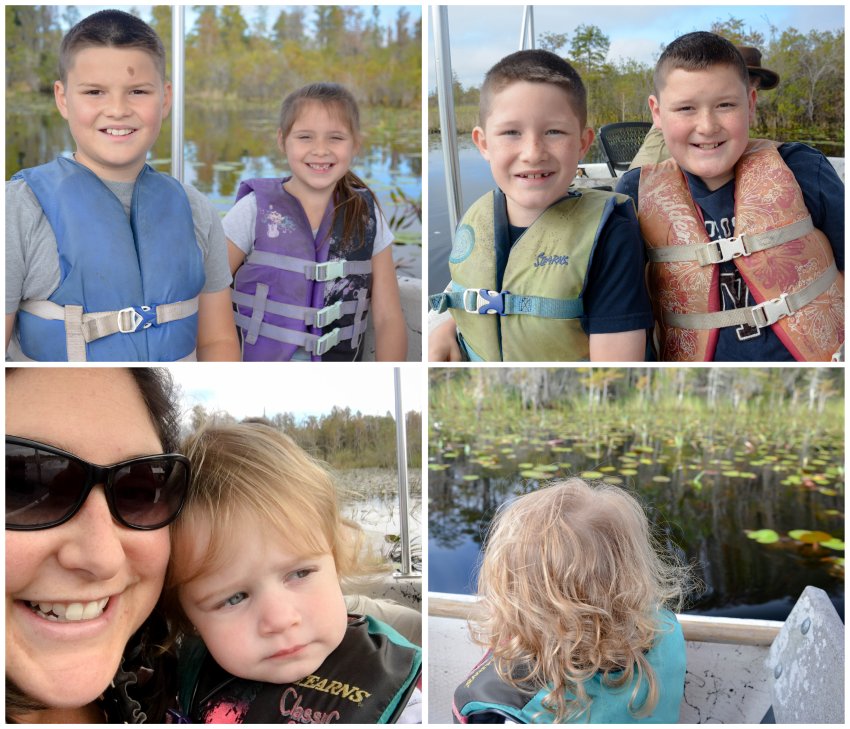 Enjoying our time on the Suwanee Canal

Gators in the swamp 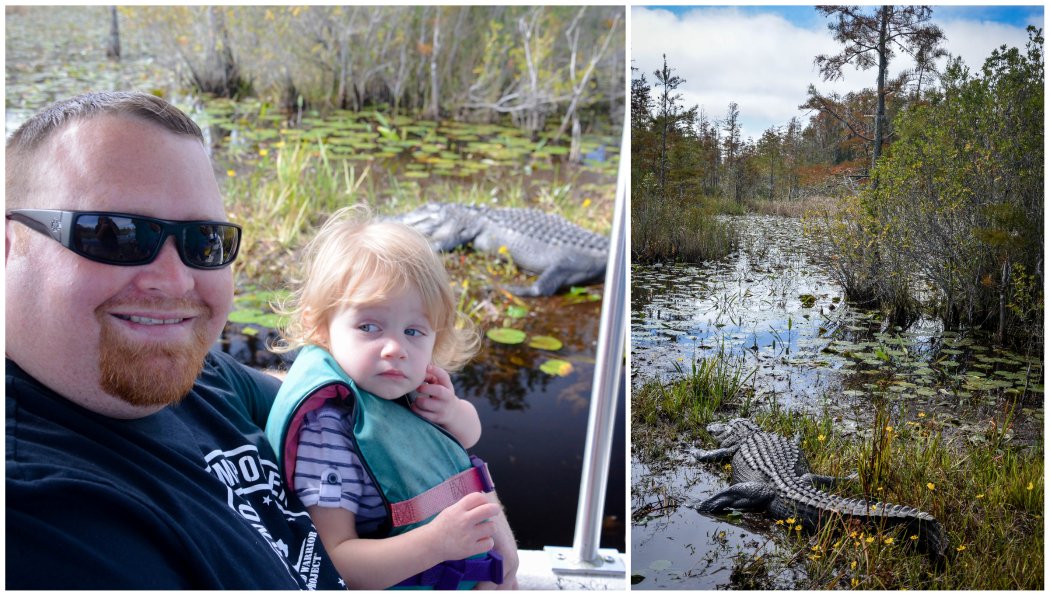 Ellie was completely oblivious to the giant alligator next to her!

We learned all about bladderwort-- a small carnivorous plant that thrives in the swamp.

The water in Okefenokee swamp is really dark, in fact, it's the largest "blackwater" swamp in North America.  The Indians that originally inhabited the swamp believed that the water had healing powers- the acidity level of the water is high enough to disinfect wounds!  The still, dark water looks almost like a mirror and easily reflects the tall trees of the swamp. 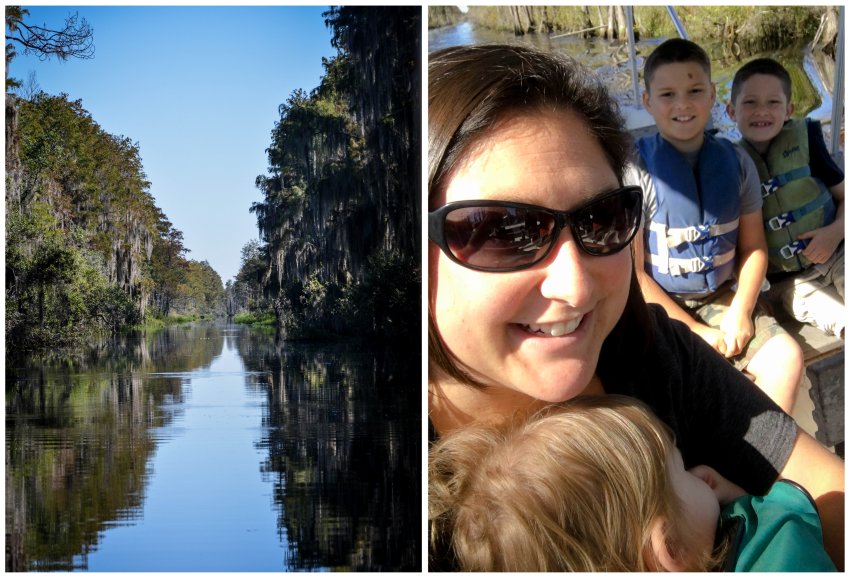 Our tour was 90 minutes and covered both the forests and the prairies of Okefenokee Swamp. 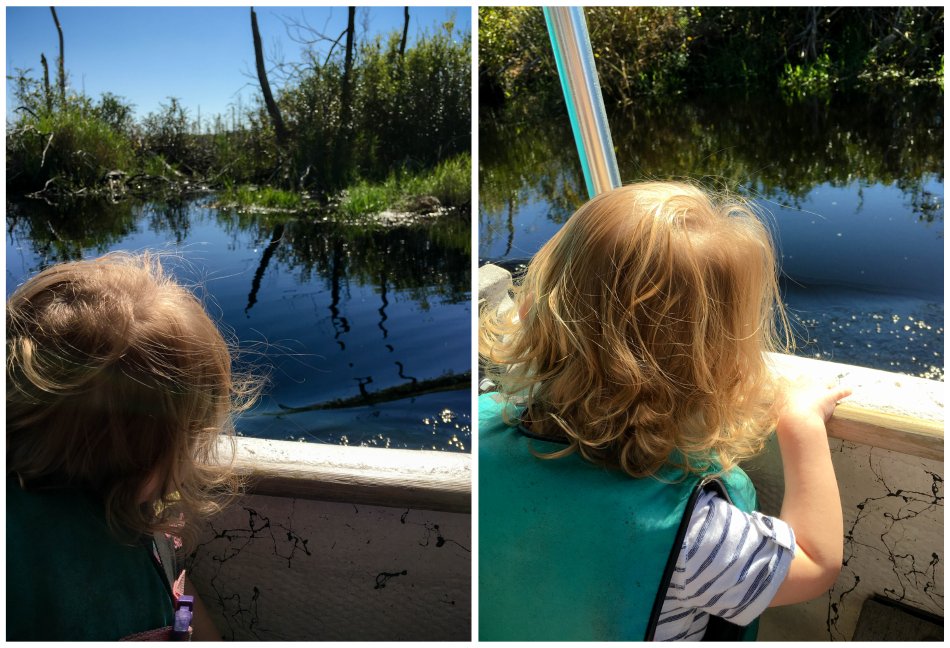 Ellie loved looking over the side of the boat, trying to find alligators. 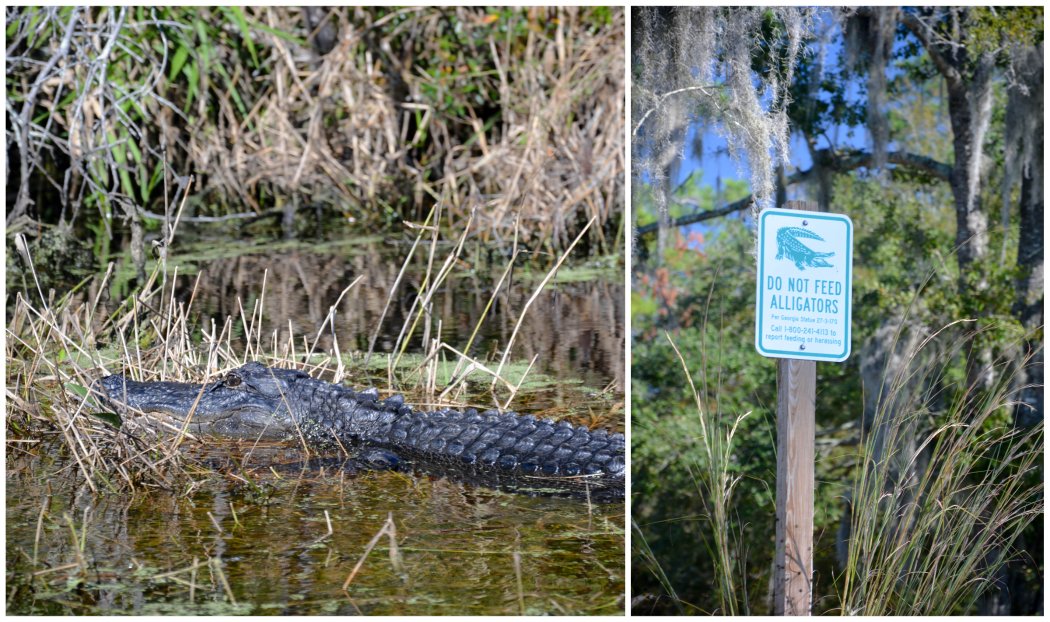 As we neared the Visitor's Center we laughed about the "Do Not Feed Alligators" signs-- it is amazing that people need that reminder! 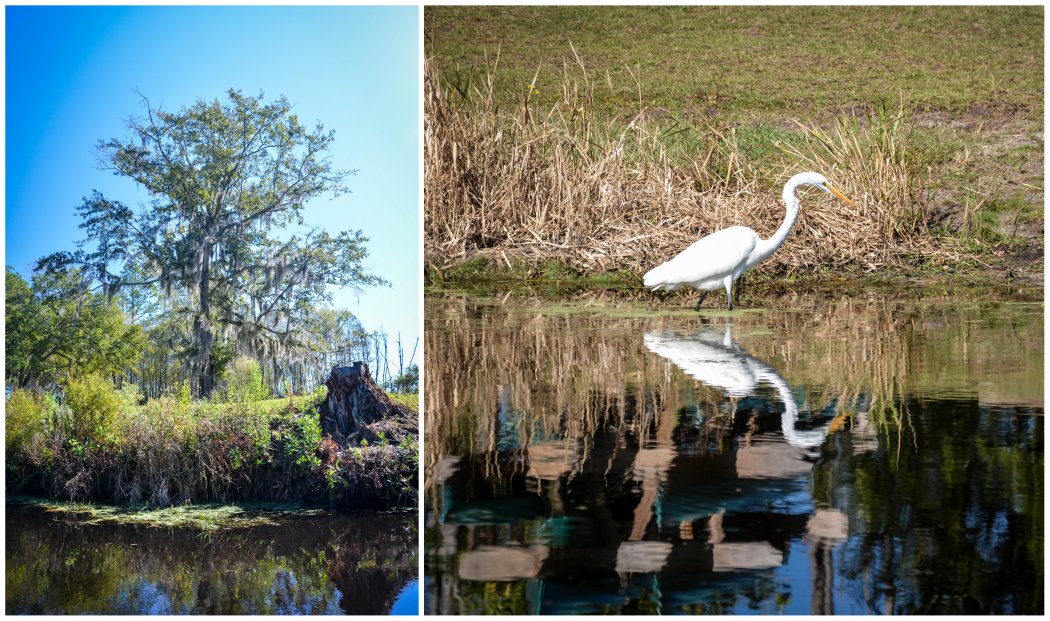 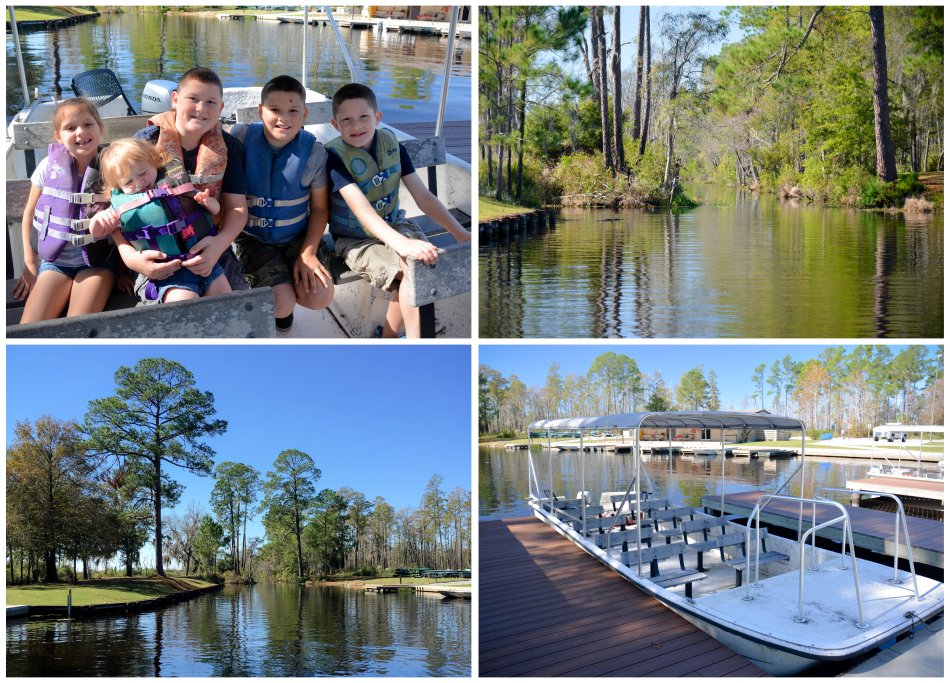 We all had a great time on the boat tour and everyone wants to go back and experience the beauty of Okefenokee Swamp again!  We made a quick stop in the gift shop and then continued our drive south.
Posted by Jennifer at 4:30 PM