We love doing character breakfasts so on this trip we decided to try the "Surf's Up!" breakfast at the Paradise Pier Hotel.  I made a 10:30am reservation since I knew we would be up late at Disneyland the night before and it worked out perfectly!

A few excited kiddos!  They made their way up to the buffet and filled up their plates before any of the characters got to our table. 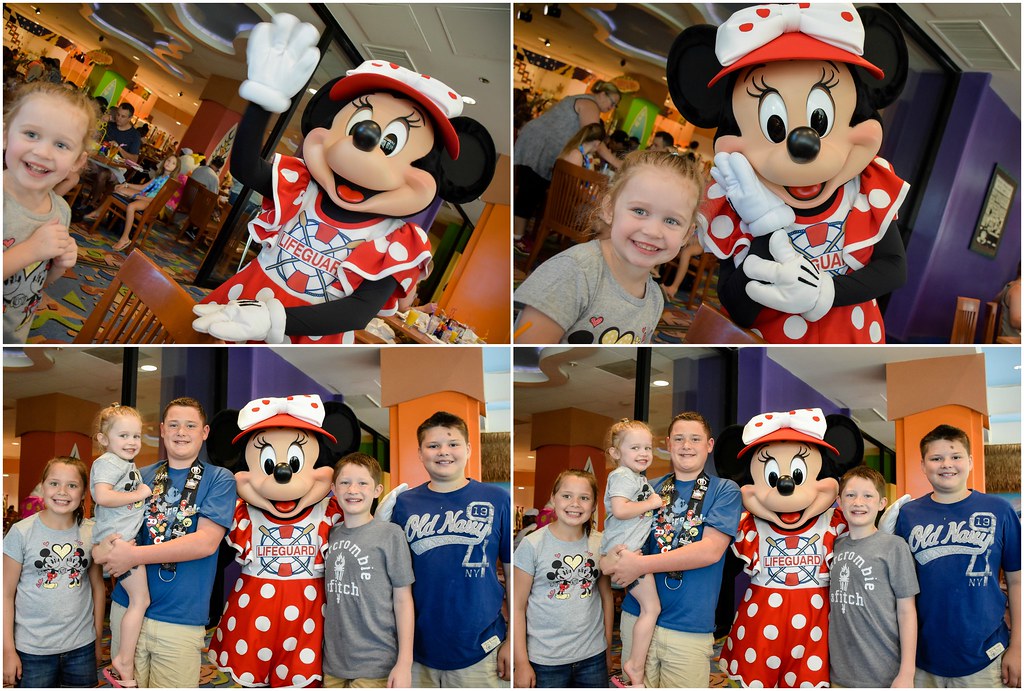 Meeting Minnie Mouse!  After being terrified of ALL the characters on our previous Disney trips, this was the year that Ellie opened up-- she was SOOOO excited to meet Minnie! 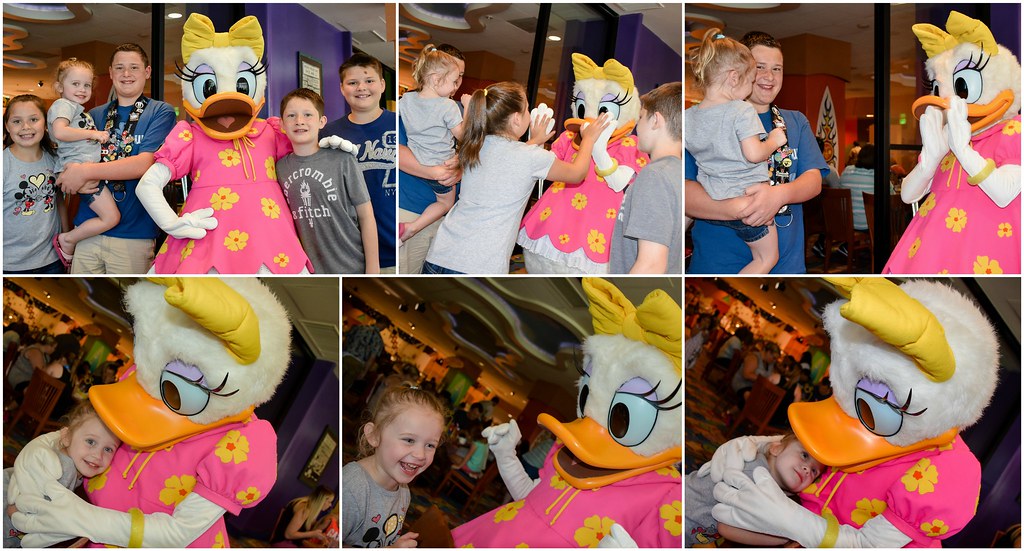 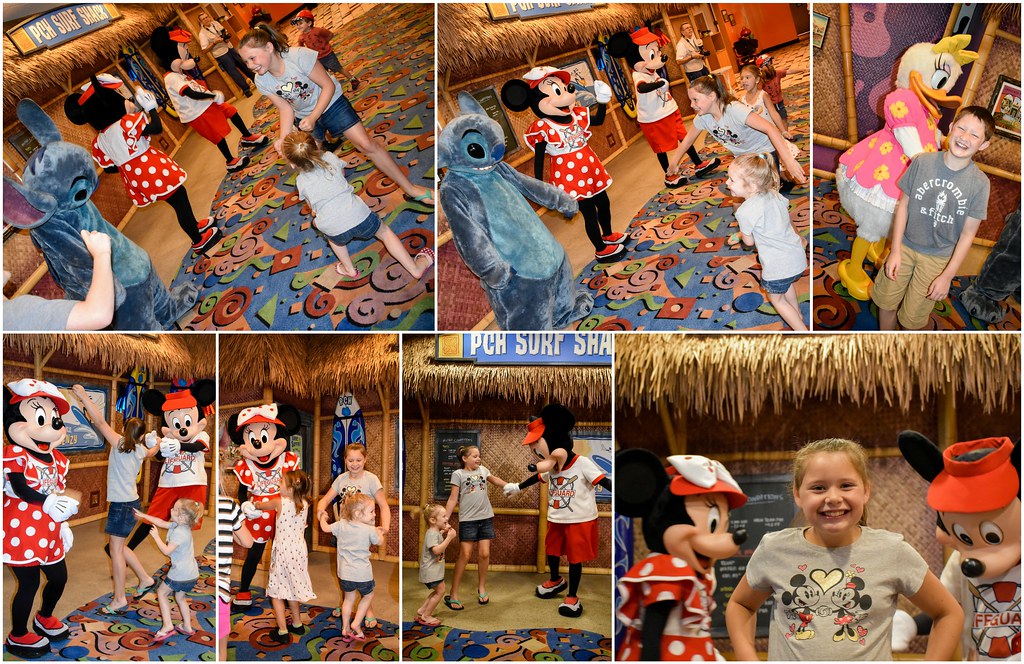 One of the best things about the Surf's Up breakfast is the awesome dance party with Mickey, Minnie, Daisy and Stitch.  The kids had a blast! 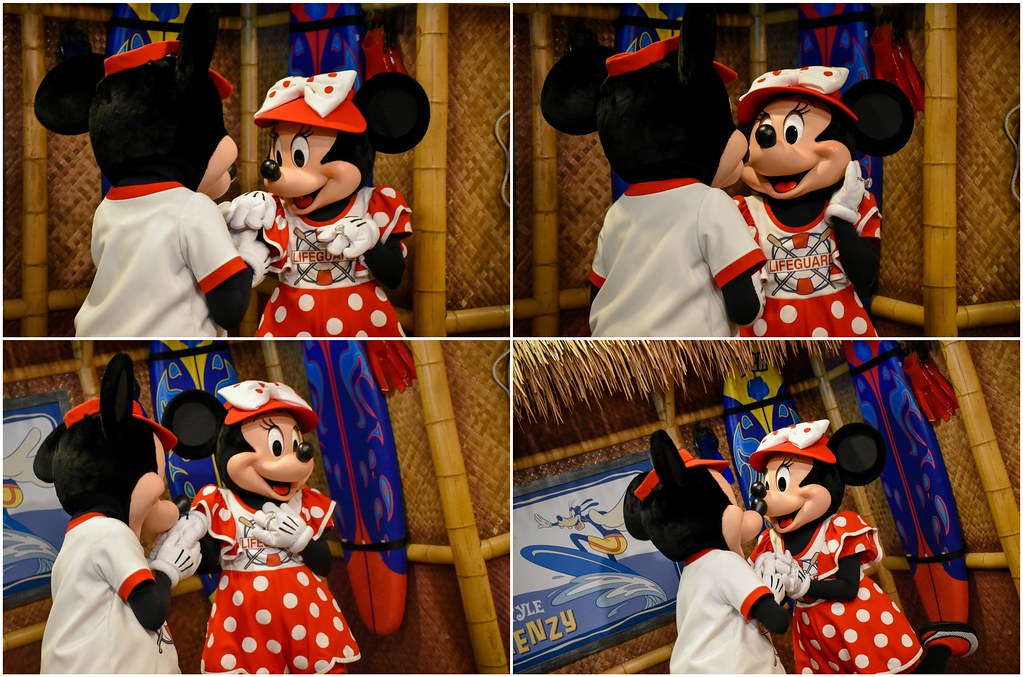 After some serious dancing fun, Mickey PROPOSED(!) to Minnie!

Since we had one of the last reservations of the morning, the characters weren't in a rush and spent lots of time interacting and playing with the kids. 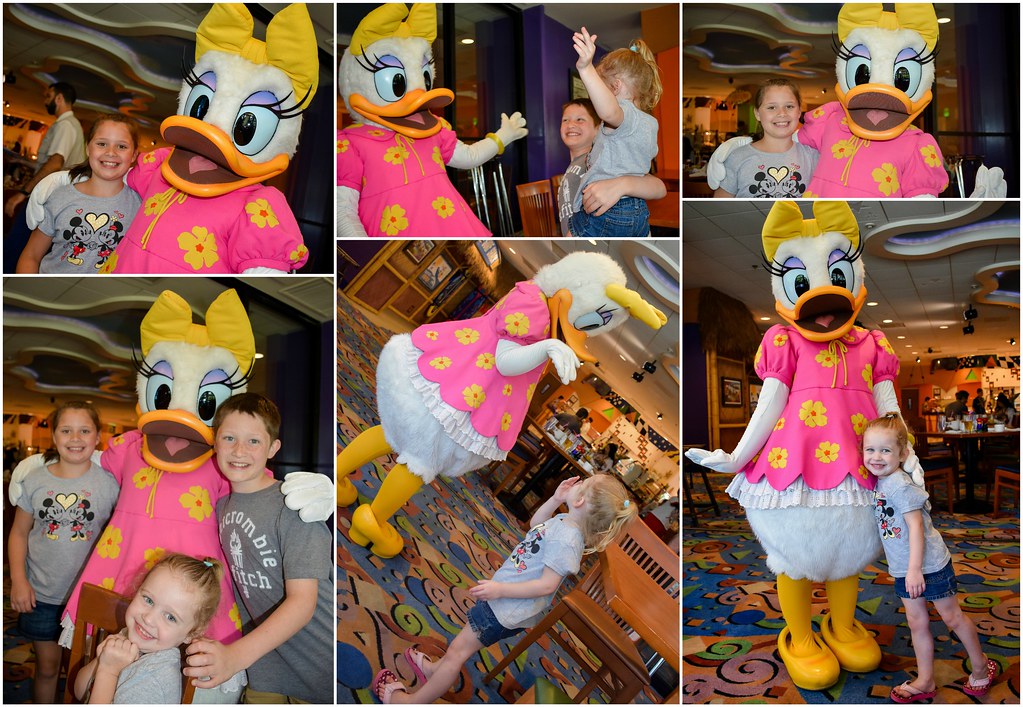 And some characters even made it around to our table a second time! 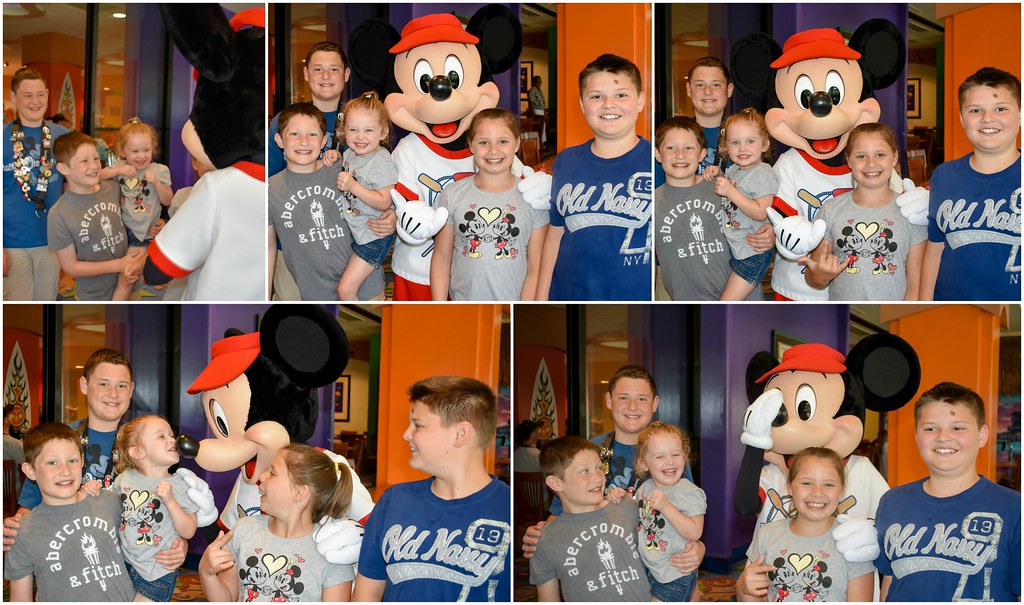 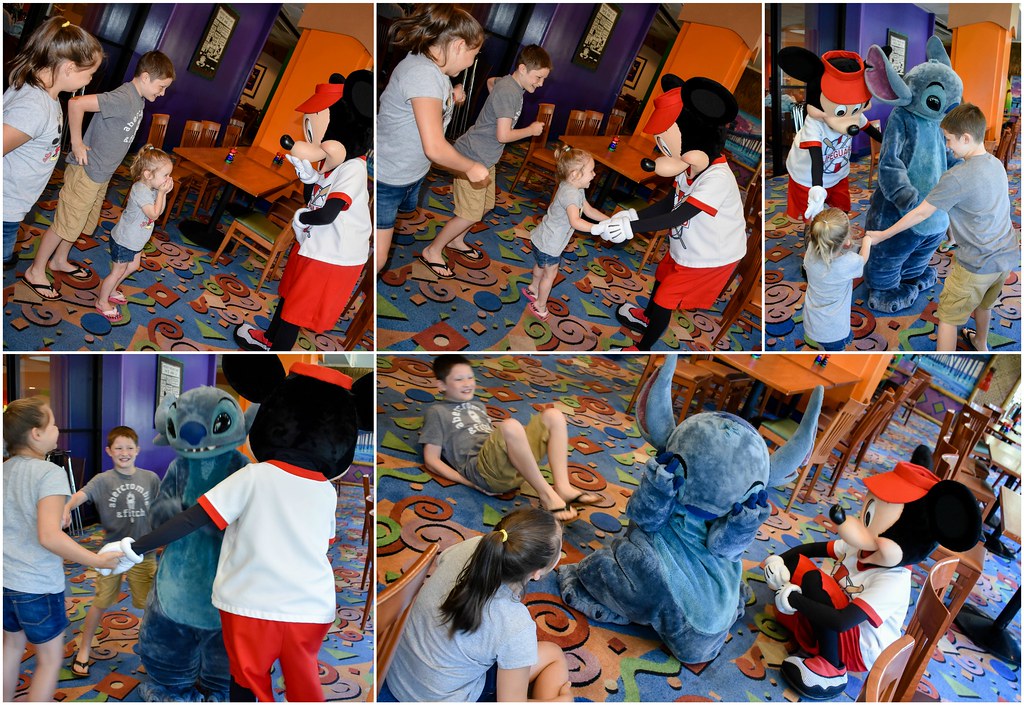 The kids played peek-a-boo and Ring Around the Rosie with Mickey and Stitch!

Pictures with Mickey - Everyone wanted a picture with the most famous mouse in the world! 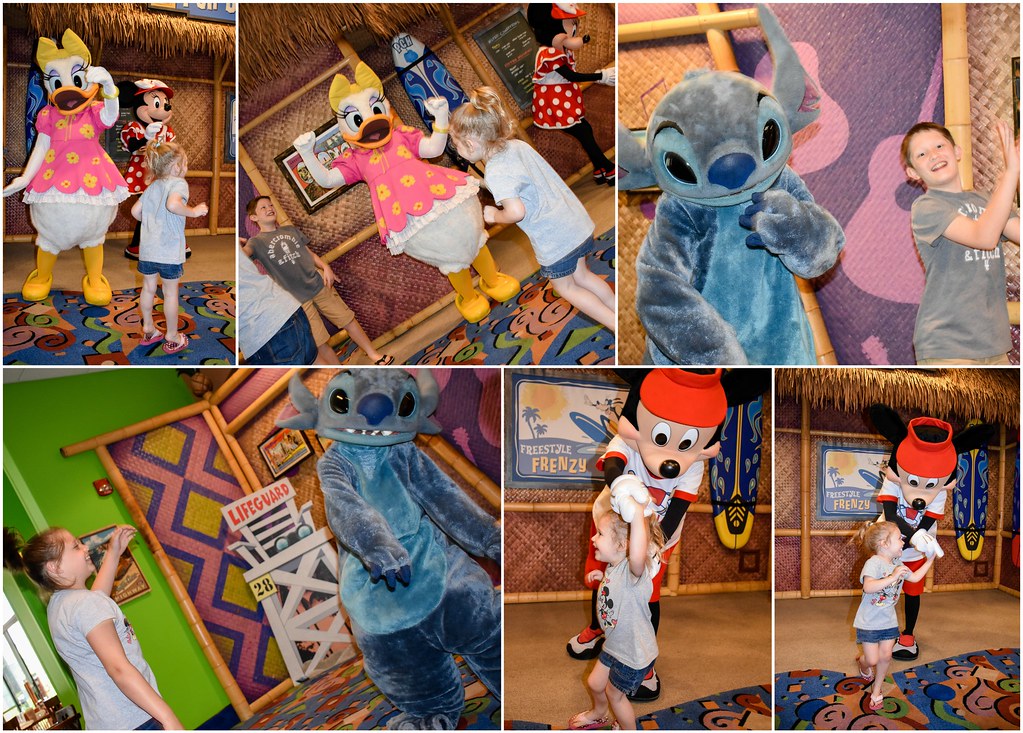 Another dance party before we left.

After our HUGE breakfast, we spent the afternoon relaxing at the pool at the Grand Californian.  The kids were obsessed with the Redwood Slide and went down over and over and over.  They (Chris and Nick) somehow convinced Ellie to go down the slide by telling her they would ride with her, but when they got to the top, found out she would have to go down alone.  Chris went down first so that he could catch her and then Nick sent her down alone!  She laughed the whole way down the slide but somehow flipped over at the end and went headfirst under the water-- she was NOT a happy camper! After her traumatic waterslide experience, she took a nice, long nap! 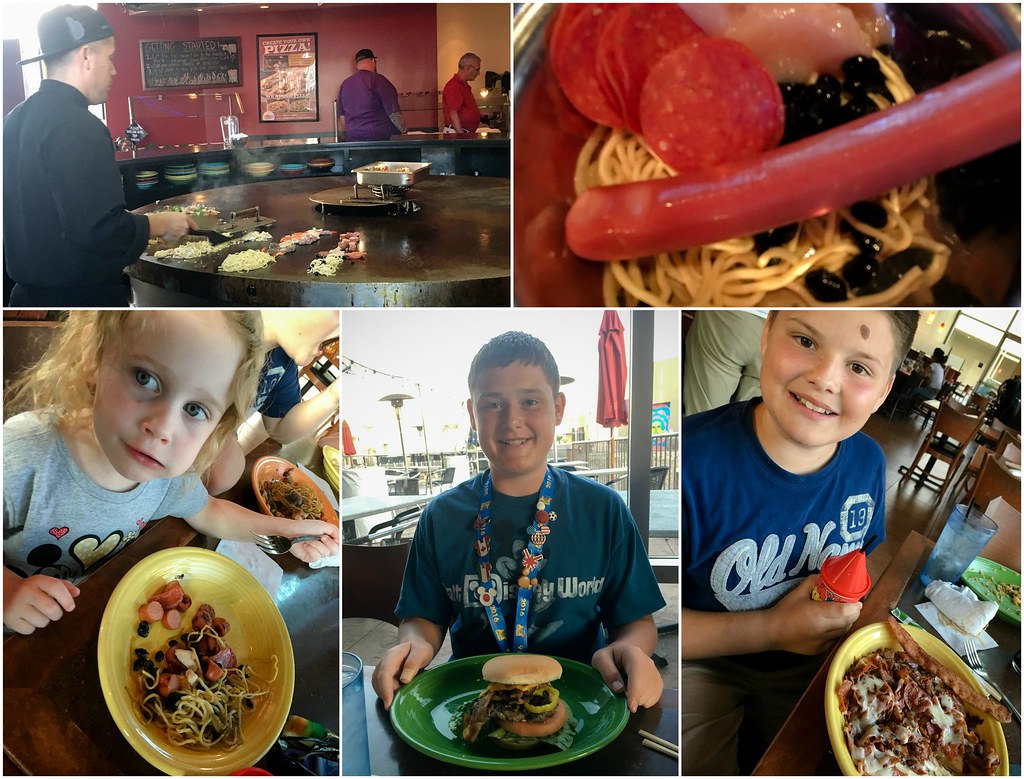 We checked out Fire+Ice at the Convention Center for dinner and it was awesome!  It's a Mongolian Grill type restaurant (you fill a bowl with protein, veggies, and sauces and they cook it on a round grill) but they also do pizza, burgers, and quesadillas-- with whatever ingredients you want!