Our hotel was in a great spot downtown making it was easy to walk to Dealey Plaza in the morning.  We watched "The Kennedys" and "JFK" before leaving on our trip so the kids had a pretty good understanding of what happened and they were looking forward to going to Dallas to see where President Kennedy was assassinated.  The white X in the road marks where the fatal bullet struck his head. 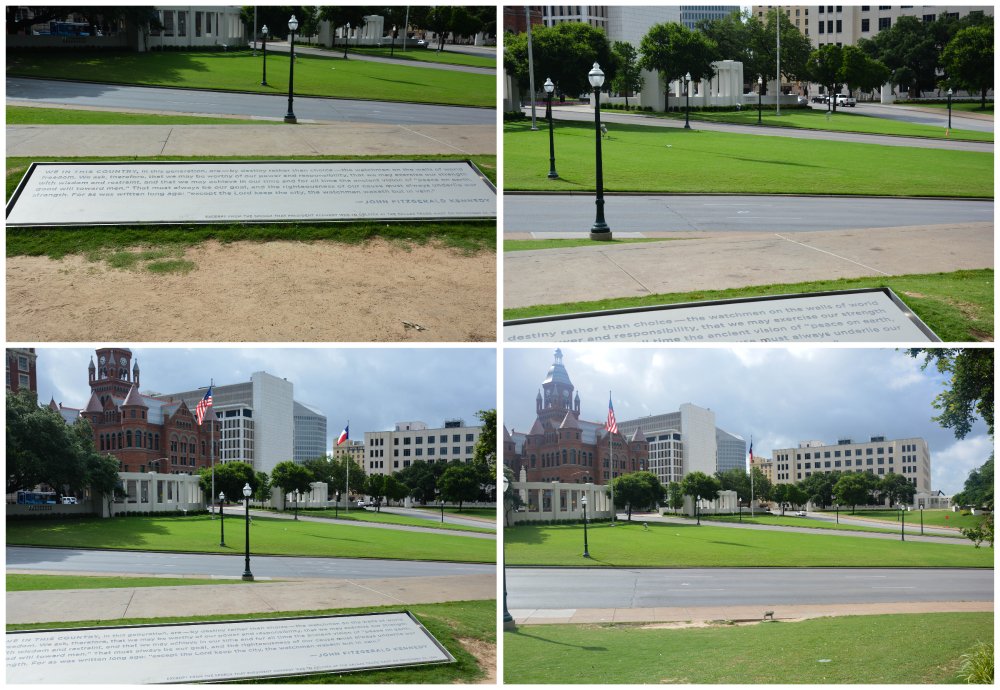 "We in this country, in this generation, are - by destiny rather than choice - the watchmen on the walls of world freedom.  We ask, therefore, that we may be worthy of our power and responsibility - that we may exercise our strength with wisdom and restraint - and that we may achieve in our time and for all time the ancient vision of "peace on earth, good will toward men."  That must always be our goal - and the righteousness of our cause must always underlie our strength.  For as was written long ago: "except the Lord keep the city, the watchman waketh but in vain."
- final paragraph of the speech President Kennedy was to deliver that day in Dallas.

Checking out the Grassy Knoll (from where shots "may" have been fired) and the 6th floor window (from where the Warren Commission says shots were fired). 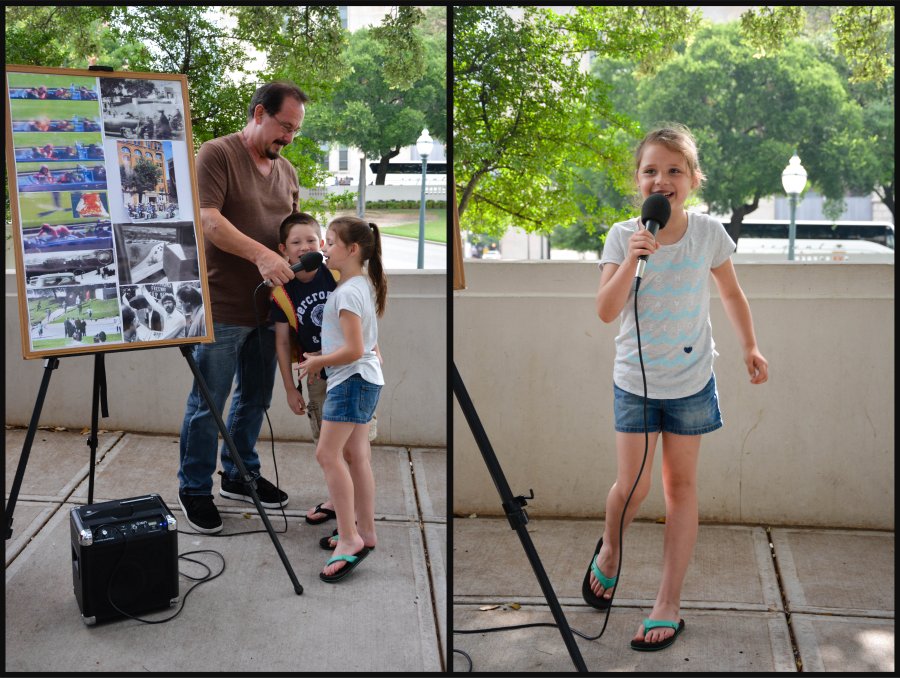 While waiting for the 6th Floor Museum to open, we chatted with a guy who completely disagrees with the Warren Commission findings and believes that the Kennedy assassination was not only a conspiracy, but involved the government.  Because our kids asked so many questions and were genuinely interested in the information he had to show them, he let them have a cool magazine with autopsy photos and frames of the Zapruder film.  When Ben and Lexie saw that he had a speaker and a microphone, they immediately asked if they could use it-- and to our surprise, he hooked it up for them and let them sing. 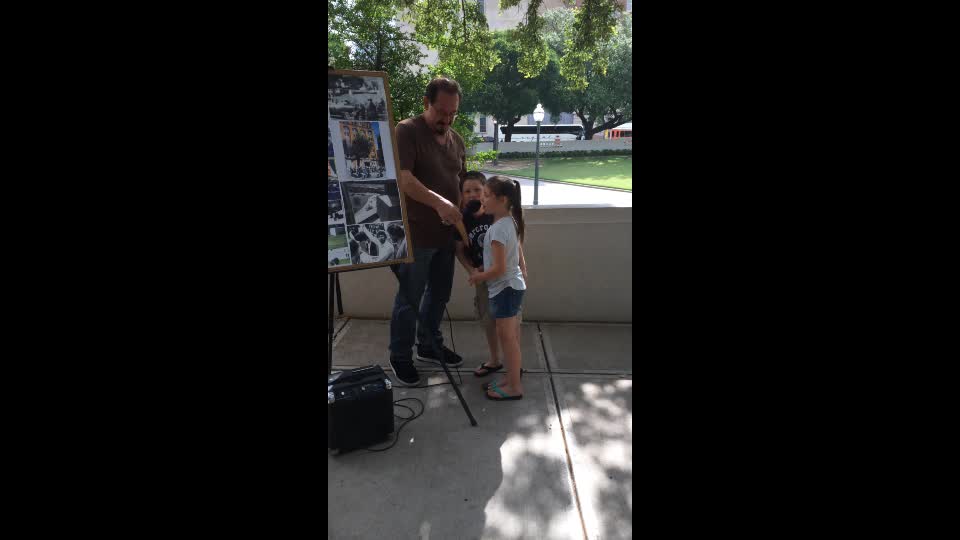 Singing "Let it Go" for the crowds at Dealey Plaza

Right before ten, we made our way to the Sixth Floor Museum (housed in the Texas School Book Depository) for a self-guided audio tour.  We purchased our tickets online ahead of time and were able to bypass the line of 100 or so that had formed prior to opening.  The audio tour takes you through the sixth floor and highlights the life, assassination, and legacy of President Kennedy.  While the window area where Lee Harvey Oswald allegedly shot Kennedy has been preserved, you can look out nearby windows but you cannot take photographs.  Once you make it through the sixth floor, you can go up to the seventh floor to look out the windows directly above where the shots came from (and take pictures). 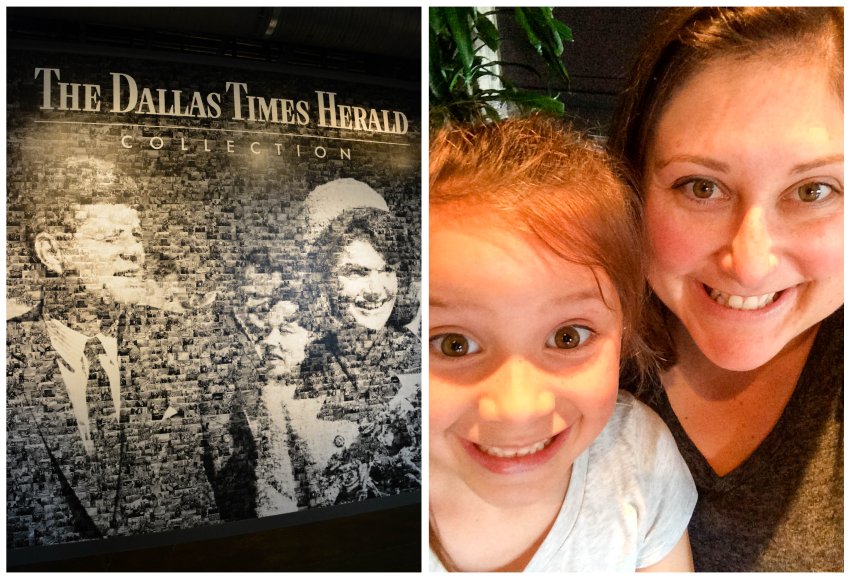 The seventh floor also has a photo mosaic made out of photographs from the Dallas Times Herald. 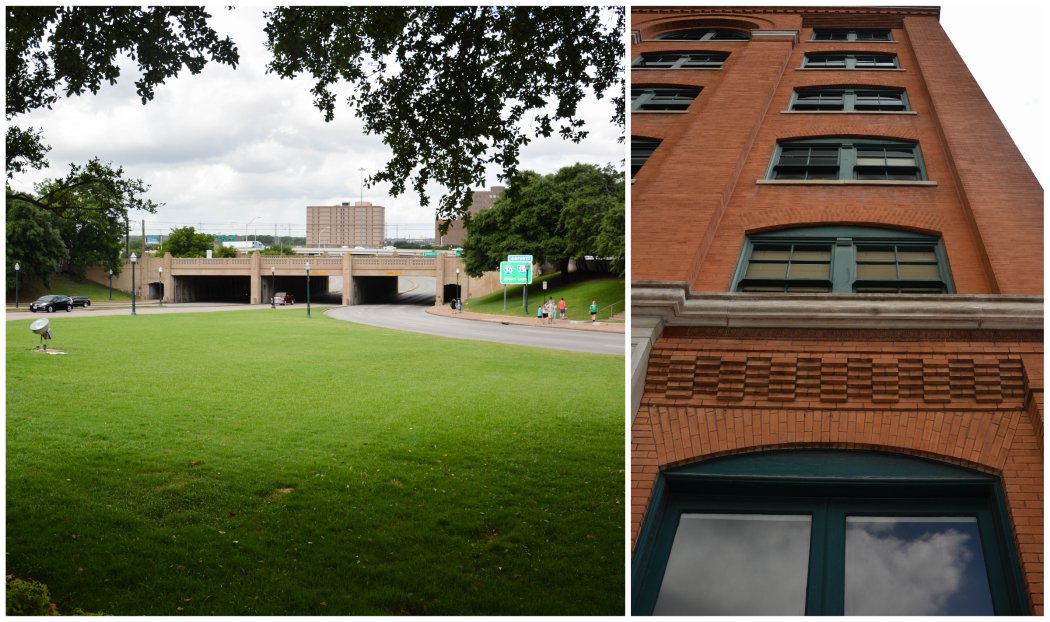 After spending a couple hours in the Sixth Floor Museum, we headed across the street to check out the Dealey Plaza Monument which has a great view of the triple underpass.  Looking up to the sixth floor window. 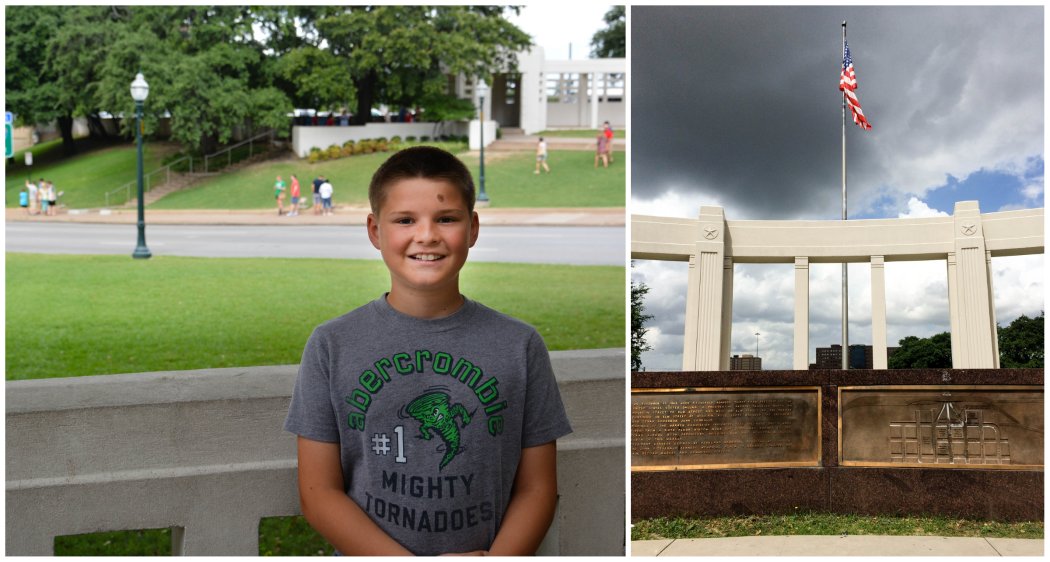 Nicholas (who loves conspiracy theories) with the grassy knoll behind him.  While the Dealey Plaza Monument was there prior to the assassination (it actually celebrates the birthplace of Dallas), it was updated with plaques explaining the assassination as well as a map of the motorcade route.
On November 22, 1963, John Fitzgerald Kennedy, thirty-fifth President of the United States, visited Dallas.  A presidential parade traveled north on Houston Street to Elm Street and west on Elm Street.  As the parade continued on Elm Street at 12:30pm, rifle shots wounded the President and Texas Governor John Connally.  Findings of the Warren Commission indicated that the rifle shots were fired from a sixth floor window near the southeast corner of the Teas School Book Depository, Elm and Houston, a block north of this marker.  President Kennedy expired at Parkland Hospital at 1:00pm.  The John Fitzgerald Kennedy Memorial Plaza is nearby, bounded by Main, Record, Market, and Commerce streets. 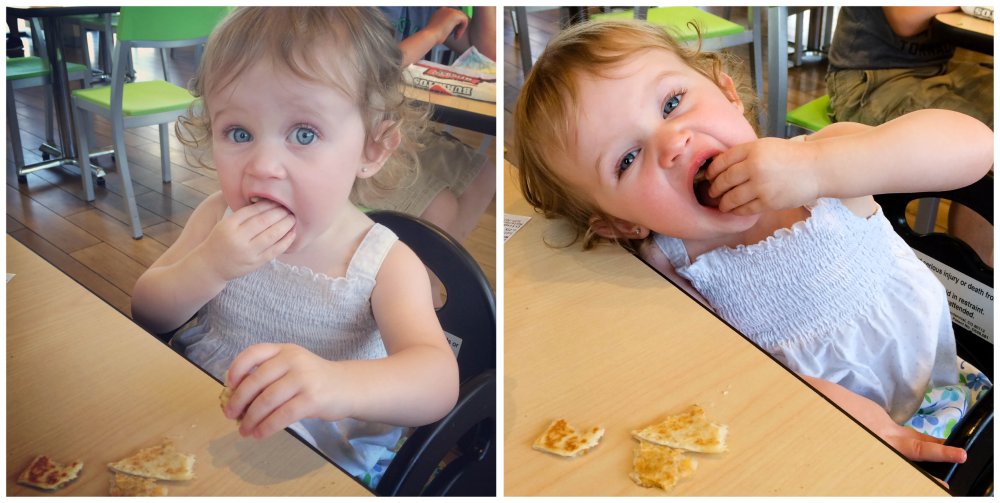 We stopped at Del Taco (yum!) for a quick lunch before continuing on our presidential tour of Dallas.

Our next stop was the George W Bush Presidential Library.  We have a family membership to the Carter Presidential Library (because it's the closest one to our house), so getting into the museum was cheap and easy.  We were quickly outfitted with iPods for the audio tour and made our way through the exhibits. 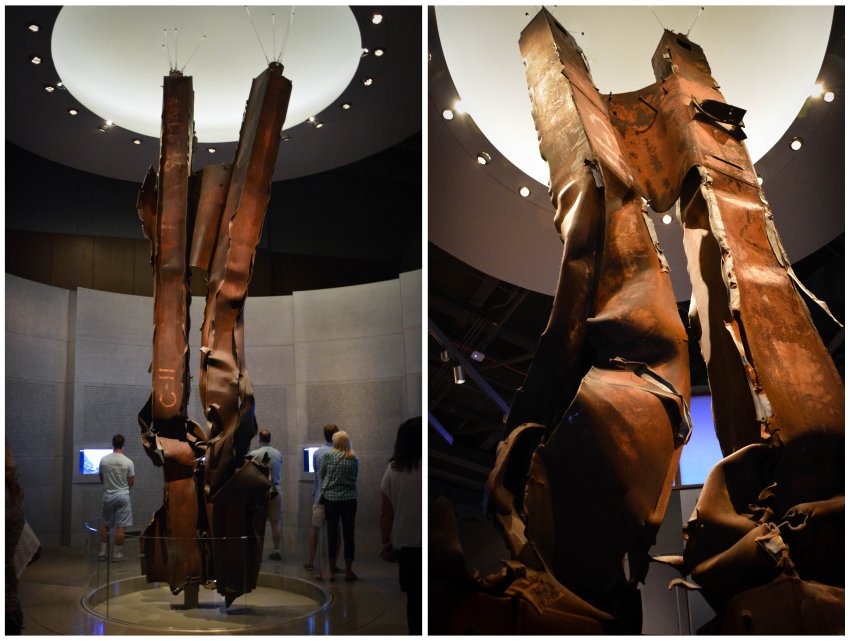 The September 11th exhibit was particularly moving and includes steel from the World Trade Center.  While our kids were not alive when 9/11 happened, they are all familiar with the events of that day and the implications they had for our country in the days and years to follow.  The names of those lost that day are etched into the wall surrounding the steel (reminiscent of the Vietnam Veteran's Wall), and as the kids stood there, tracing the letters with their fingers, they seemed to really grasp the enormity of the situation. 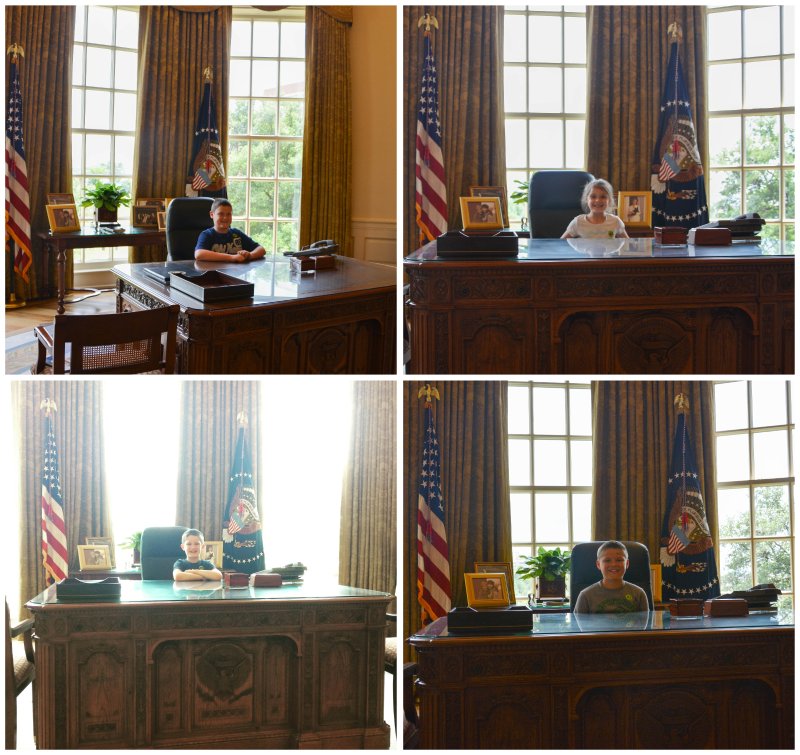 The highlight for the kids was definitely the full-sized replica of the Oval Office and they each wanted their picture posing as the President.  They also asked if there were any secret compartments in the Resolute Desk (no, there are not!) 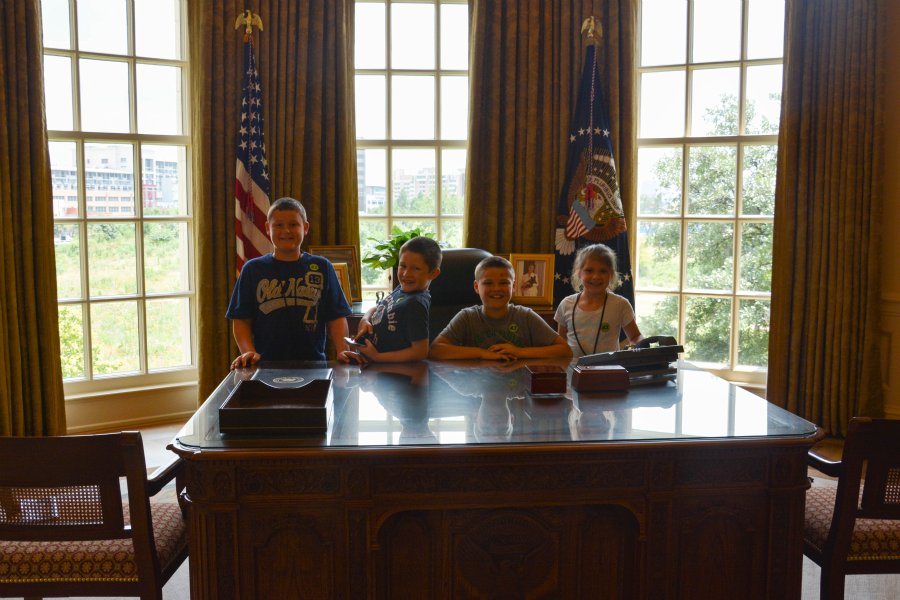 Presidential kids (minus Ellie who was relaxing in the stroller). 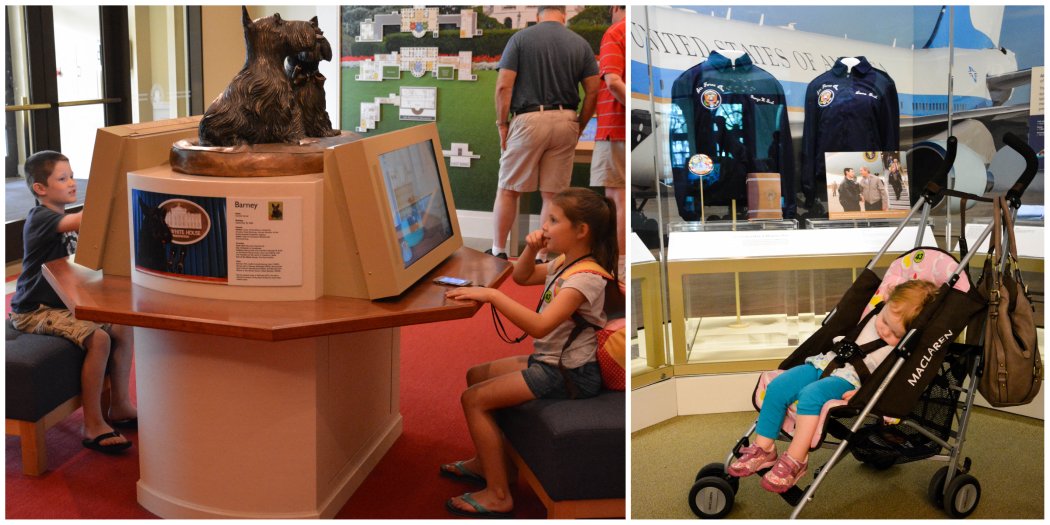 I really appreciated all of the interactive displays and games throughout the museum.  It made it much more enjoyable when traveling with the kids because they were able to interact with the information and not just read a sign.  All of the multimedia displays couldn't keep Ellie awake though! 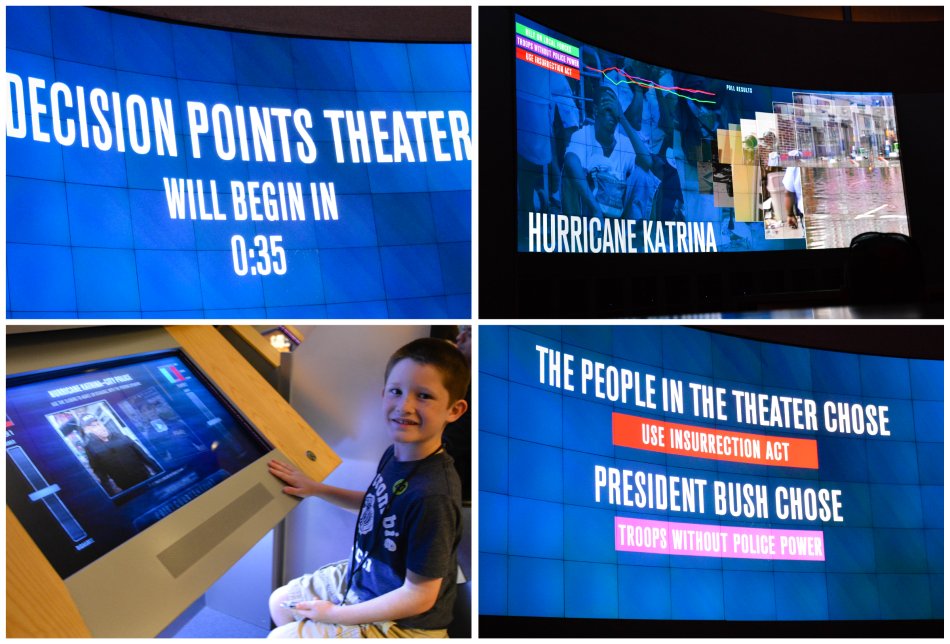 The Decision Points Theater was another highlight- the group of 24 in the theater votes on a disaster or crisis scenario to deal with and then goes "inside" the President's decision making process.  After listening to experts weigh in on how to respond, each participant gets to vote on how to handle the situation. 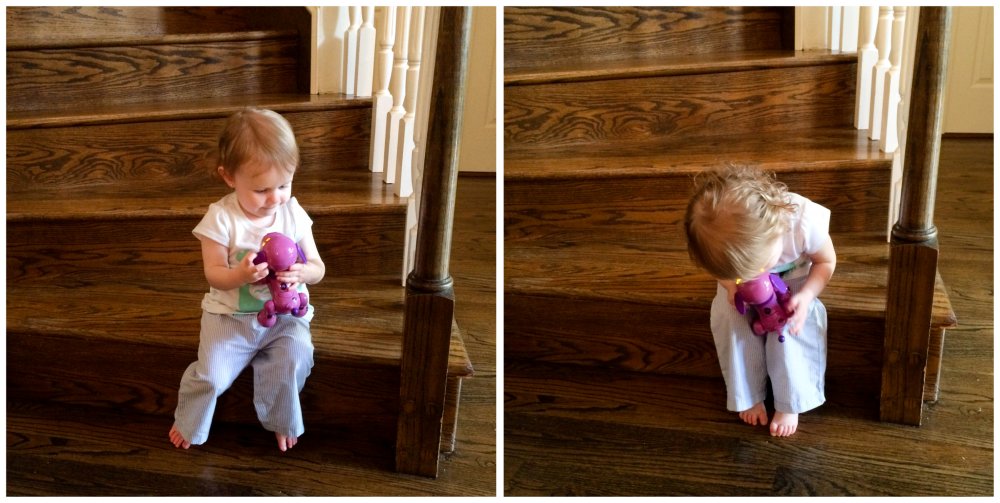 After our fun time at the library, we made our way (in the POURING rain!) to my cousins' house for the evening.  We hadn't seen the Shaws since Janne's wedding back in 2008 so it was great to spend the evening catching up.  The big kids LOVED playing with their second cousin, Lauren, and Ellie LOVED playing with Lauren's toys.
Miles Driven Day Four: 25
Total Trip Miles: 1114