Our first full day in California started with a trip to Griffith Park to see Walt's Barn.  Disneyland has always been very special to my family (mainly because my dad and Disneyland were "born" in the same year) and we've been MANY times.  As my dad has gotten older, he's become even more nostalgic about all things Disney and I knew that a trip to Walt's Barn would be right up his alley.

In the 1950s, Walt Disney built the barn (a replica of his family's barn in Missouri) and a 1/8th scale live-steam railroad (Carolwood Pacific Railroad) at his home in California.  While his attention soon turned to creating Disneyland, the barn was still somewhere that he spent many hours, calling it his "happy place".  In 1999, the barn was moved to its current location in Griffith Park and is now run by the Carolwood Foundation.  It is only open the third Sunday of the month for four hours, so it worked out perfectly that we were planning to be in California that weekend! 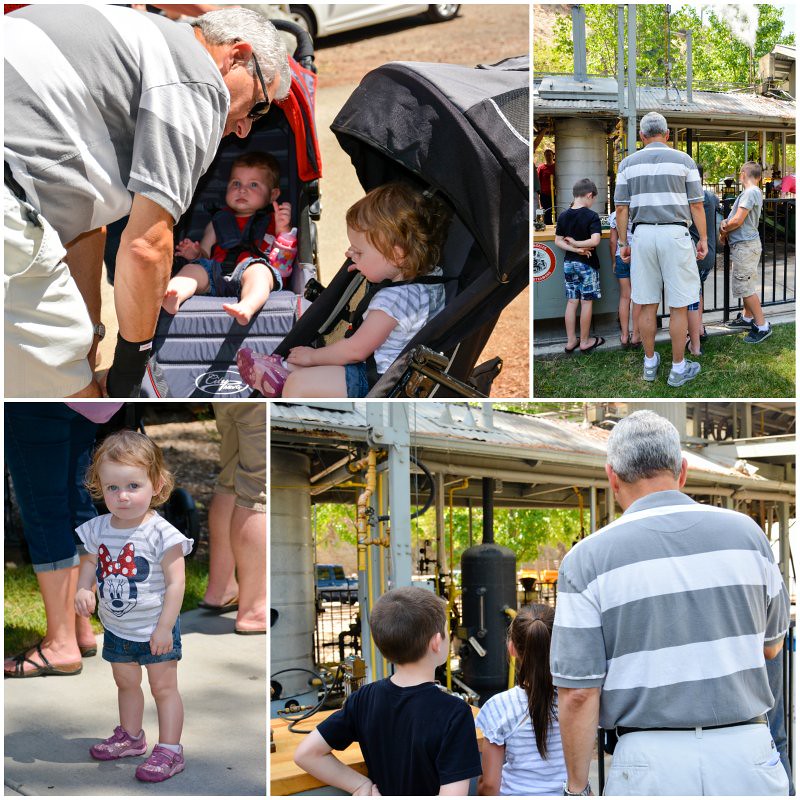 Talking trains with the baby granddaughters before heading in and then explaining the workings of steam machinery to the bigger grandkids. 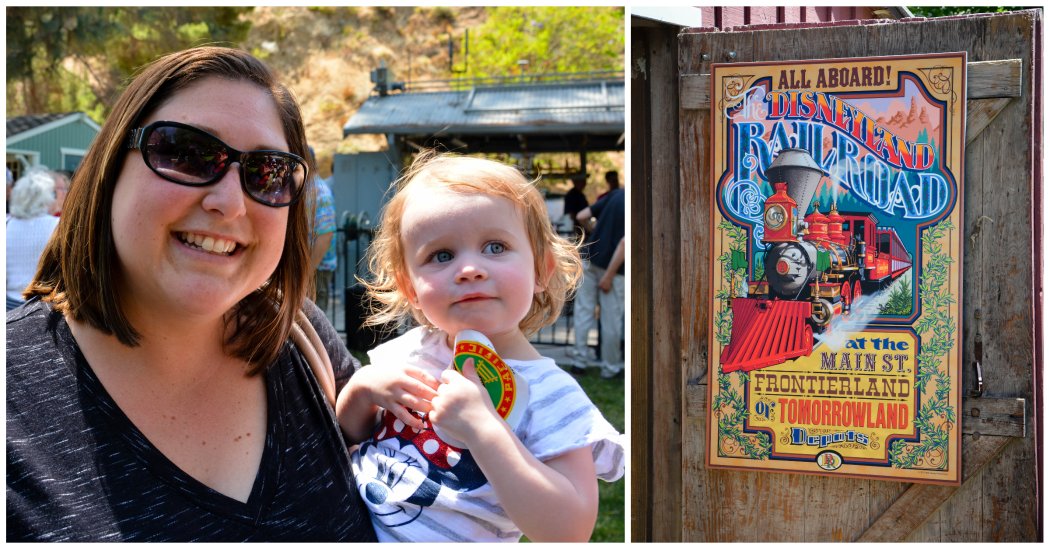 Waiting in line for the grand opening of "The Trains of Disneyland: 60 Years of Magical Railroading" 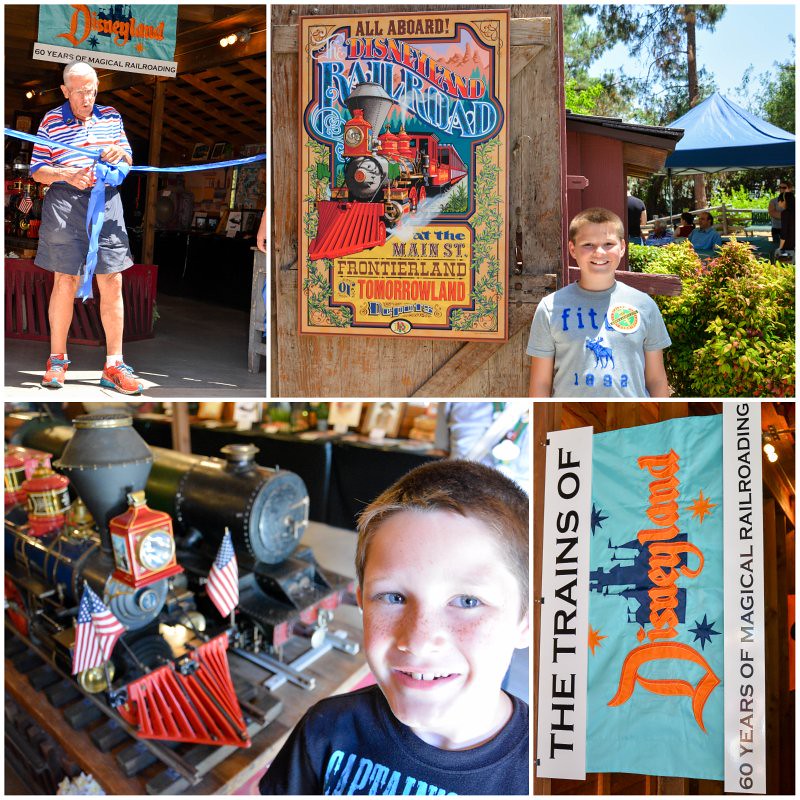 Bob Gurr, Imagineer and Disney Legend, cut the ribbon for the exhibit and then we were free to go in and look around.  Since there was no flash photography (and I was carrying a squirmy Ellie) we didn't get any good pictures inside, but the barn was FULL of Disney memorabilia and artifacts- especially those centering around the trains of Disneyland.

Outside, we ran into a musician who thought it would be fun to have Ben and Lexie sing with him. 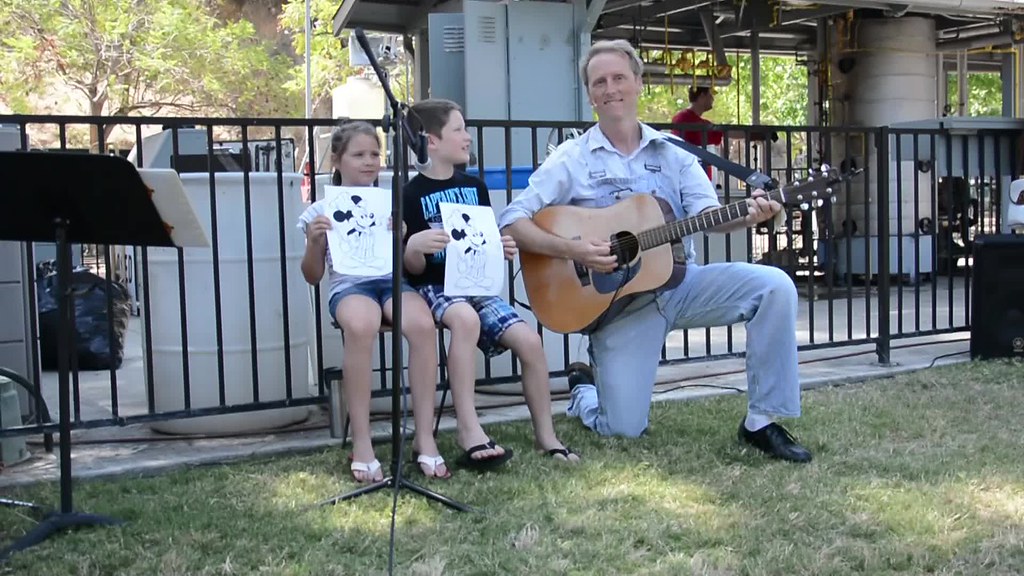 Serious and silly faces in front of the original Santa Fe & Disneyland Combine coach and a side view of Walt's Barn.

After a fun morning taking in Disney history and a quick lunch at Baja Fresh, it was time to check into our hotel in Anaheim and head to Disneyland!  We stayed at the Fairfield Inn this time and while it's not a Disney property, it is within walking distance and we were there in no time!

A family photo in front of Main Street station was the first thing on the agenda!  And then one of just Jacob and the kids since it was Father's Day. 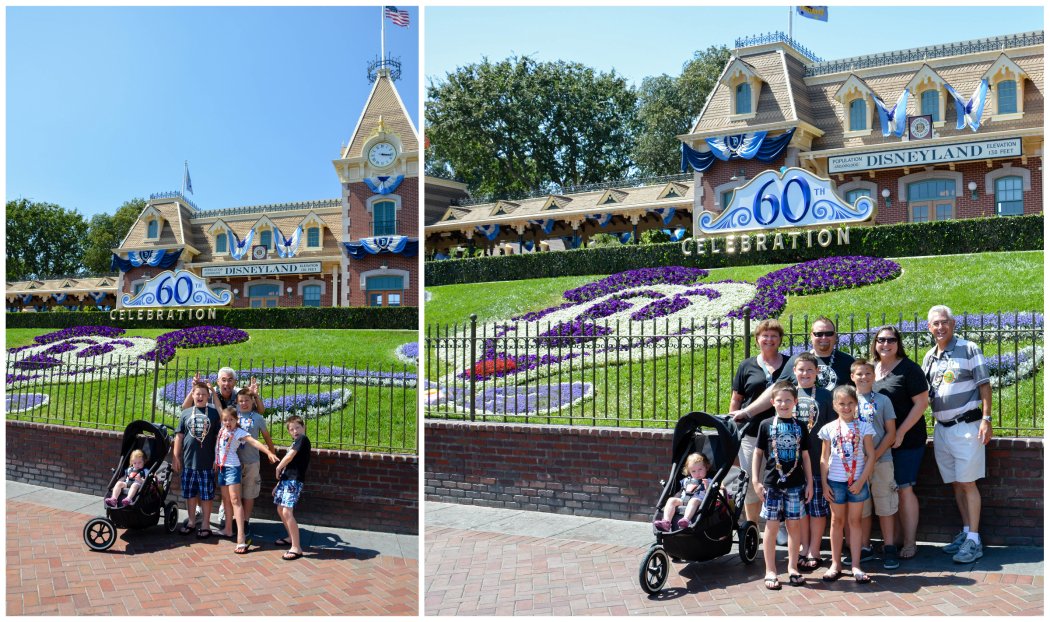 We got one of just Grandpa and the kids since Grandpas are really just fathers with years and years of experience!!  And one of the whole family!

The "diamond" decor started at the very perimeter of the Disneyland Resort and made its way throughout the park.  It was fun seeing the little diamond touches! 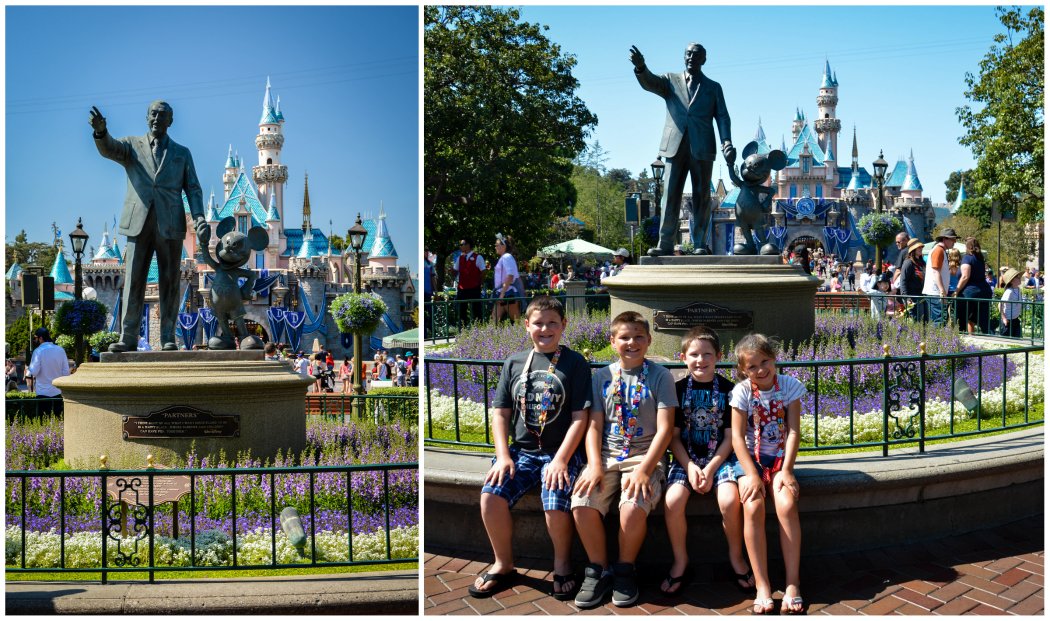 The Partners Statue without and with kids.  The big kids all commented on how small the castle looked compared to the castle at WDW. 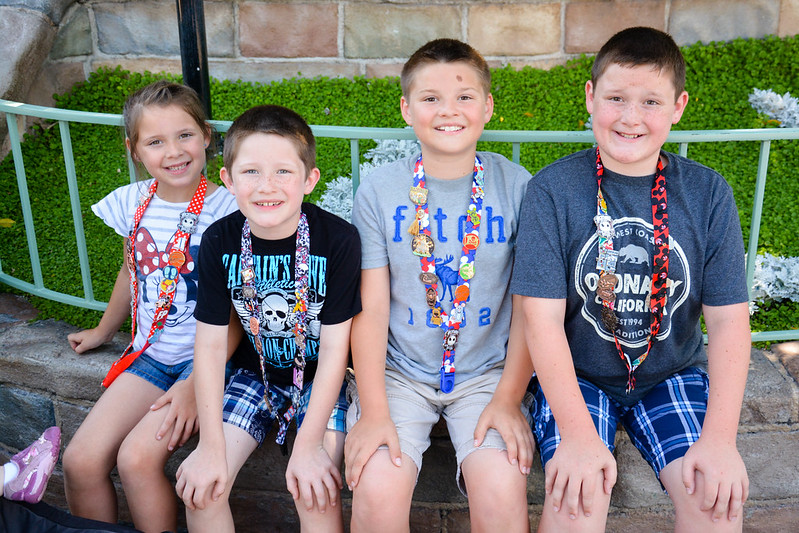 All five kids (see, Ellie's foot is in the picture!).  Since Ellie was too small to go on the "mountains" we had to child swap every time so while Grandma and Grandpa were on the Matterhorn, we took a break on a wall by the teacups. 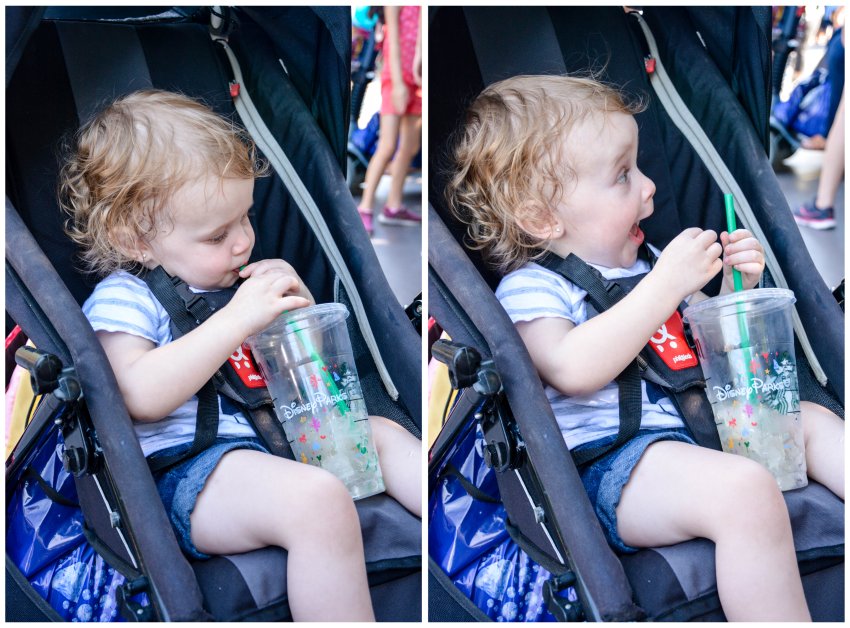 Someone stole my iced coffee!  We loved all the Disney details- they were even on the Starbucks cups! 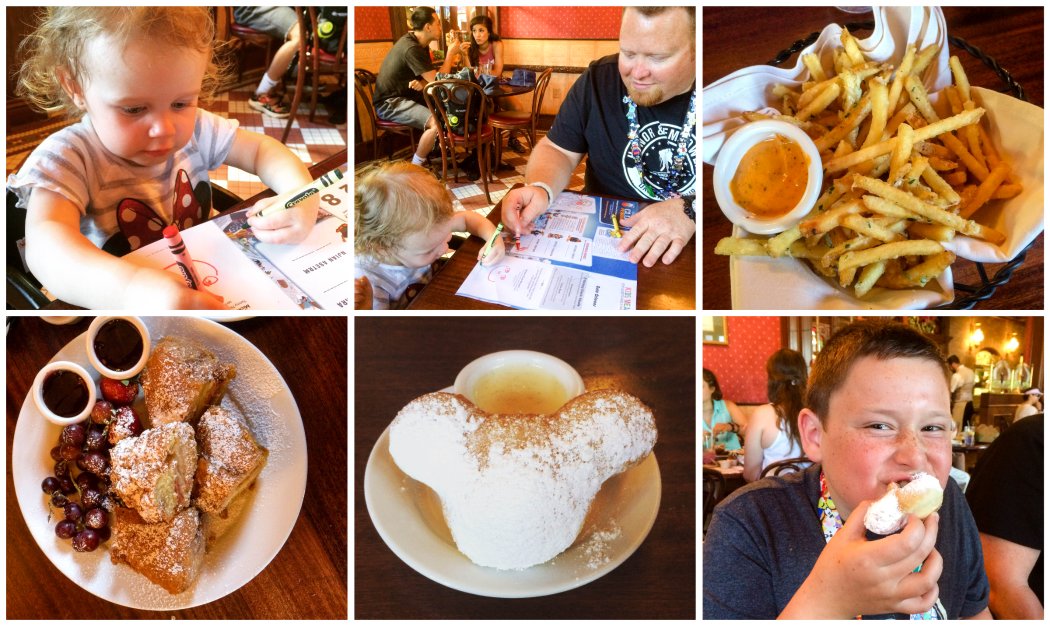 We had dinner reservations at Cafe Orleans and it proved to be a cool and refreshing break from the summer heat.  The kids (and Jacob!) enjoyed coloring while we waited for our food.  The pommes frites, Monte Cristo and Mickey-shaped beignets did not disappoint!

After dinner it was time for RIDES!  Ellie was so excited to see Buzz Lightyear and go on AstroBlasters and the big kids were finally tall enough for Indy (no one was tall enough last time we went to Disneyland in 2008 and they don't have it at WDW)! 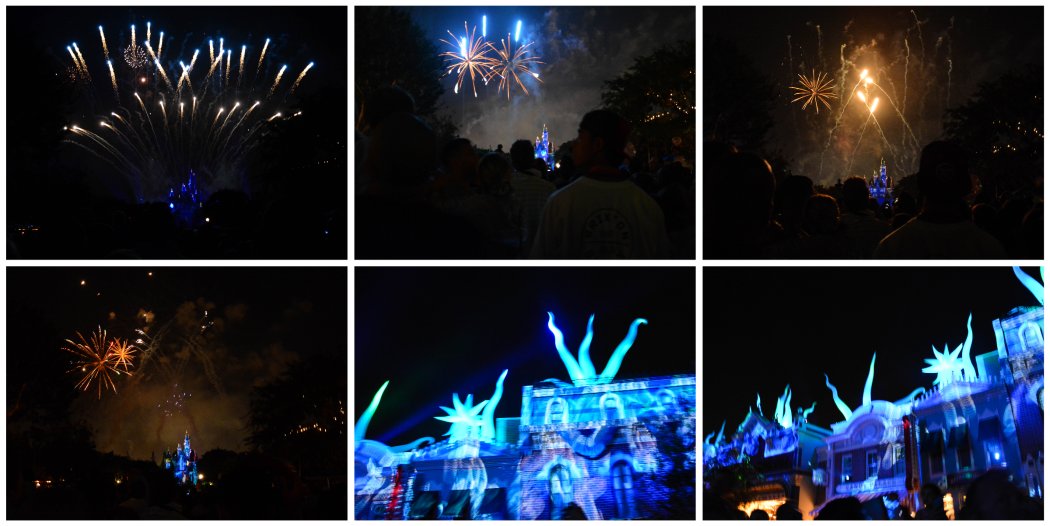 We waited inside the stores on Main Street for the Paint the Night parade to pass by and then rushed onto Main Street with hordes of people to see the new fireworks show, Disneyland Forever.  The new show is completely immersive and in addition to having fireworks going up behind the castle, there are projections on Main Street, the Matterhorn, and It's A Small World.  It's not possible to see the whole show from any one area in the park though Main Street is reportedly the best place to watch from (view-wise, not crowd-wise). 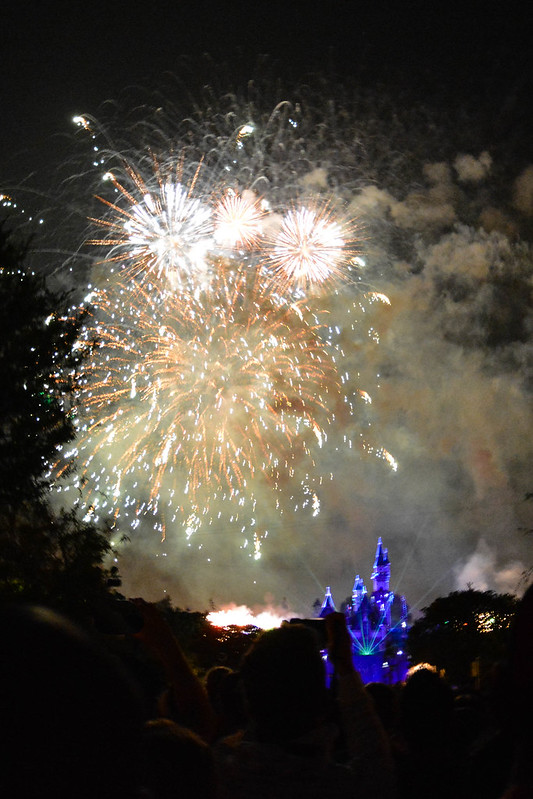 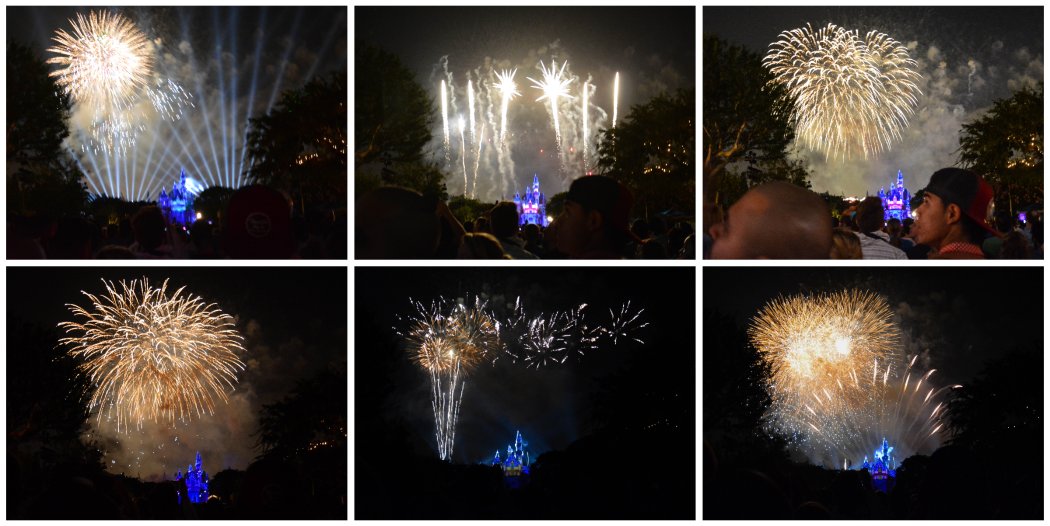 It was definitely one of the best fireworks shows that Disney has ever done but it was funny to see people staring at the Main Street projections and completely missing the fireworks in front of them.  All in all, it was the perfect end to a magical Disney day.